What is a Shooting Star candlestick pattern and how does it work?

A Shooting Star is a (1- candle) bearish reversal pattern that forms after advancement in price.

Here’s how to recognize it:

And this is what a Shooting Star means…

In short, a Shooting Star is a bearish reversal candlestick pattern that shows rejection of higher prices.

Now, the Shooting Star Candlestick Pattern is one variation of bearish price rejection.

But it can also appear in the forms like Bearish Engulfing Pattern, Gravestone Doji, etc.

Instead, learn how to read it properly so you never need to memorize a single one ever again.

And all you need to do is ask yourself:

“Where did the price close relative to the candle’s range?” 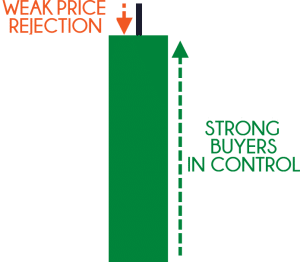 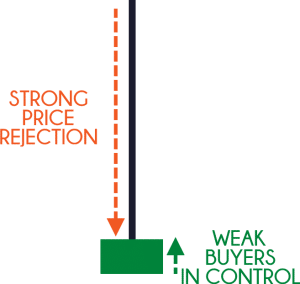 Because you must also consider the context of the market (like the trend, the area of value, etc.).

If you don’t, then you could be shorting in an uptrend (which is a low probability trade).

“So how should I trade the Shooting Star candlestick pattern?”

Well, that’s what you’ll discover next, read on…

This is my proprietary trading formula and it’s powerful when combined with reversal candlestick patterns.

You’d know you should never trade candlestick patterns in isolation.

Instead what you want to do is ask yourself…

“Is it in an uptrend, downtrend, or range?”

Since the Shooting Star candlestick pattern is a bearish pattern, you’d want to trade it in a downtrend.

If you’re unsure how to identify a trend, then check out this training below…

Now just because the market is in a downtrend doesn’t mean you go short as the price could be at an “extreme” level (and about to snap back higher).

So, what you want to do is to trade from an area of value.

But for now, let’s move onto the next step…

This refers to the specific “pattern or signal” that will get you into the trade.

Since this post is about the Shooting Star candlestick pattern, let’s use this as an entry trigger.

So, here are a few examples on The M.A.E Trading Formula…

But remember, the Shooting Star is only one variation of bearish price rejection.

There are others like Bearish Engulfing Pattern, Dark Cloud Cover, Gravestone Doji, etc. — these can serve as an entry trigger too.

Now, I think The M.A.E Trading Formula is awesome!

No matter how good it is, you’ll still encounter losing trades — it’s a fact of trading.

That’s why you must have a stop loss in place so you can minimize the damage done to your trading account.

#1: Find out what’s the current ATR value of the market you’re trading

#2: Add the ATR value to the highs of The Shooting Star candlestick pattern, and that’s your stop loss level

Now, the last part of the equation is to exit your winning trades.

And here are two ways you can go about it:

As a swing trader, you’re only looking to capture “one move” in the markets, and that’s it.

This means you exit your trades just before opposing pressures steps in.

So, if you are long, then you can consider taking profits at Resistance, Swing highs, Fibonacci Extension, etc.

If you want to learn more, then check out The NO BS Guide to Swing Trading.

Riding massive trends others can only dream off

If you want to ride a trend, then you must not have a fixed target profit.

If you do so, then you’re cutting your profits short (which makes it impossible to ride a trend).

So if you want to ride massive trends, then you need to use a trailing stop loss.

Some examples of trailing stop loss are:

Now if you want to learn more, then check out 5 Powerful Techniques to Trail Your Stop Loss and Ride Massive Trends.

Bonus training: 3 powerful tips to increase the probability of your winning trades

Are you ready for bonus trading tips to improve your trading results?

Then check this out…

#1: Focus on the major Resistance levels, that’s where traders get trapped

When you trade The Shooting Star candlestick pattern, you want to focus on trading the major Resistance levels (the ones which can be seen on the higher timeframe).

Because when a level is obvious and the price breaks out of it, many traders will hop on the bandwagon and buy the breakout (hoping to catch a piece of the move).

However, if the price makes a false breakout, this group of traders is trapped, and their stops will trigger strong selling pressure.

Now, this is to your advantage because The Shooting Star candlestick pattern allows you to trade the false breakout and profit from “trapped” traders.

So the more obvious the level, the more traders will get trapped — and you make more money.

#2: The stronger the price rejection, the better

There are two trains moving at 20km/h towards each other.

When they collide, what happens?

The front part of the train gets damaged and both trains come to a halt.

Now, what if one of the trains decides to increase his speed to 200km/h while the other remains at 20km/h.

Clearly, the faster train would destroy the slower one and continue moving while the other gets “kicked out” of the track.

And that’s the same for trading.

When you trade price rejection, you want to be the faster train moving at 200km/h — that’s where you’re dominant.

This means when you trade the Shooting Star candlestick pattern (or any type of price patterns), you want to see a strong price rejection.

And here’s how you identify a strong price rejection…

#3: The stronger the momentum, the better

When you trade reversals, you want to have a strong momentum move coming into the level.

(I know it sounds contradicting but bear with me on this.)

Because when there’s a strong momentum move, there’s little-to-no “obstacles” in your way.

This means the price has a lot of room to move before opposing pressure steps in (thus increasing your profit potential).

If you compare this to a “stair-stepping” move, you’ll face many “obstacles” in your way — and this reduces your profit potential and winning rate.

Clearly, if you want to trade market reversals, a strong momentum move is always preferred.

How do you trade The Shooting Star candlestick pattern?