Have you heard of the Golden Cross signal?

If you listen to the media, you’ll hear about the Golden Cross (like how the market is bullish when it occurs).

But is it true?

What is a Golden Cross and how does it work?

However, no downtrend lasts forever.

An example of a Golden Cross chart:

Now some of you are probably wondering:

Is there anything magical about the 50 and 200-day moving average?

There’s no magic to it.

You can use the 49-period and 199-period for all you want and it will not matter.

Because the concept is what matters (which is the short-term trend showing signs of strength against the long-term downtrend).

The moving average is only a tool to define the trend.

How NOT to trade the Golden Cross Pattern

Now I know what you’re thinking…

Let’s go long when the 50MA crosses above the 200MA and sell when it crosses below — and make a ton of money!

Well, not so fast my young padawan.

Because in a range market, the Golden Cross will cause many losses (otherwise known as a whipsaw).

Unless you know what you’re doing, I don’t suggest “blindly” trading the Golden Cross.

Instead, there are better ways to trade it and I’ll tell you more in the next section.

If you’re the type of trader who always can’t seem to decide whether you should be long or short, then this trading technique is for you.

Because the Golden Cross can act as a trend filter so you can trade on the right side of the markets (and increase your winning rate).

Here’s how it works:

If the 50MA crosses above the 200MA, then you’ll look to long only.

Or if the 50MA crosses below the 200MA, then you’ll look to short only.

Look for long setups when the 50-day crosses above the 200-day Moving Average:

Look for short setups when the 50-day crosses below the 200-day Moving Average:

Now, don’t get me wrong.

It doesn’t mean go long immediately when the 50MA cuts above the 200MA.

Instead, it means you have the “permission” to look for long trading opportunities when the 50MA cuts above the 200MA — a big difference.

If a Golden Cross occurs, then you can look for bullish trading setup like a Flag Pattern, False Break, Triangles, etc (which I’ll cover more later).

Earlier, the examples used were for the Forex and Futures market.

But for stocks, it’s different.

Because individual stocks are “influenced” by its respective stock index.

Yangzijiang would be affected by what STI is doing rather than S&P 500.

That’s why you get the saying…

“A rising tide lifts all boats.”

In essence, if the index is bullish, then chances are the stock will move higher.

So how do you apply the Golden Cross to stock trading?

You overlay the Golden Cross to the stock index.

If a Golden Cross occurs on the S&P 500, then it means you want to be bullish on stocks within the S&P 500 index.

But does the Golden Cross really work? 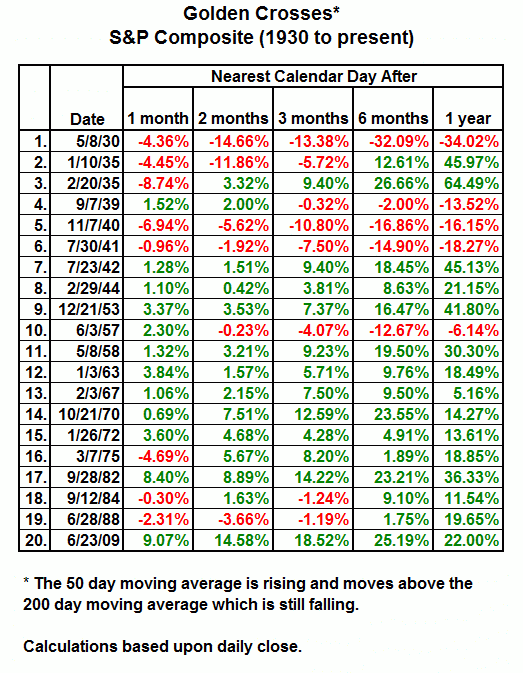 This shows the returns after 1 month, 2 months, 3 months, 6 months, and 1 year after the Golden Cross occurs on the S&P.

Clearly, the Golden Cross has a positive bias, and the market is likely to head higher after it occurs.

And in the next section, you’ll learn how to better time your entry when trading the Golden Cross.

Golden Cross Trading Strategy: How to better time your entry using this ONE simple technique

Now, you don’t want to go long just because you spot a Golden Cross.

Because you could be entering when the market is “overextended” — and about to reverse lower.

You can use multiple timeframes to better time your entry.

Here’s how it works:

A Golden Cross on Daily timeframe…

A Bull Flag pattern on the 4-hour timeframe…

The beauty of this method is you’ll have a better entry, tighter stop loss and a more favorable risk to reward.

But the downside is you might miss the move if can’t find a valid trading setup.

How to ride MASSIVE trends with the Golden Cross

If you want to ride massive trends in the market, you cannot have a target profit.

Because a target profit limits your profit potential?

“Hey Mr. Market, don’t give me too much profits. I’ve had enough.”

You must trail your stop loss.

This means as the market moves in your favor, you’ll “lock in” your gains but still give your trade room to breathe — should the price moves further in your favor.

And one way to go about it is using the Golden Cross as a trailing stop loss.

If you’re in a long trade and the market moves in your favor, then you’ll hold the trade till the 50-day crosses below the 200-day Moving Average.

A trailing stop loss is not easy to execute.

Because often, your winners will become losers as you try to ride the trend — and that’s the price you must pay.

#1: Does the Golden Cross work on lower timeframes like 1-hour or the 15minutes charts?

Yes, the concepts of using the Golden Cross as a trend filter or to trail your stop loss can work on the lower timeframe as well.

However, I would caution against using the Golden Cross to time your entries and exits because you’ll always be one step behind.

#2: Are you using SMA or EMA for the 50 and 200 moving averages? Will the difference affect my trading?

I’m using the EMA for the moving averages.

The difference isn’t much. The only difference is that the EMA is more responsive compared to the SMA. And that’s just my personal preference, there’s no right or wrong style of moving average to use.

#3: How can I know beforehand that the market is in a range so I can avoid getting whipsawed out of my trades when using the Golden Cross strategy (or Golden Crossover strategy)?

You’ll never know ahead of time whether the market is going to be in a range or trending higher, etc.

So, here’s what you’ve learned today:

Now over to you…

How do you use the Golden Cross in your trading?