The secret to reading candlestick chart is…

“Rayner, is this some kind of lame joke?”

When you learn a new language, what do you start with?

Because you can’t form a sentence without understanding the words.

And it’s the same for trading!

So, the first thing you’ll learn is how to read candlestick patterns like a professional trader — even if you have zero trading experience.

(Or if you prefer, you can watch this candlestick chart tutorial training below…)

What is a candlestick pattern and how does it work?

So, before I dive deep into this candlestick chart tutorial, you must first know the basics of a candlestick pattern.

A candlestick pattern has 4 data points:

High – The highest price over a fixed time period

Low – The lowest price over a fixed time period 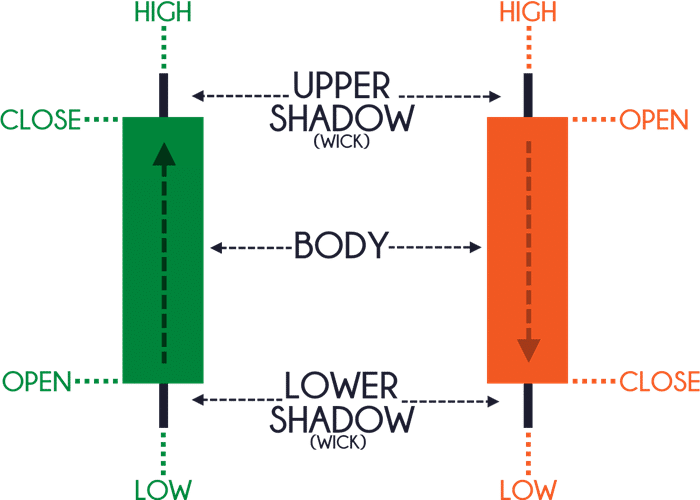 For a Bullish candle, the open is always BELOW the close.

For a Bearish candle, the open is always ABOVE the close.

That information is the main foundation for reading candlestick chart patterns.

Candlestick analysis: How to read candlestick chart and understand any candlestick pattern without memorizing a single one

There are hundreds of candlestick patterns out there.

And it’s silly to memorize every single candlestick pattern because you’ll “burn” yourself out.

Instead, I’ll teach you a trading hack that allows you to understand any candlestick pattern without memorizing a single one.

Every time you see a candlestick pattern, you want to ask yourself these 2 questions:

These two questions are what makes complete candlestick patterns.

So let me explain…

1. Where did the price close relative to the range?

This question lets you know who’s in control momentarily. 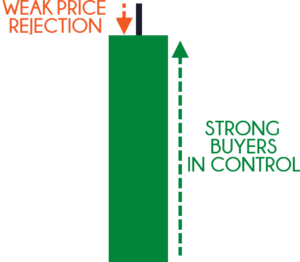 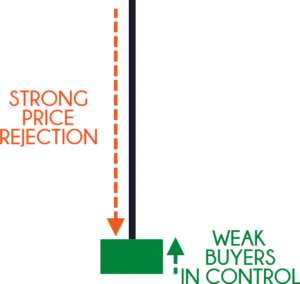 Once you get to know who’s in control, every candlestick chart patterns you see will be easier to spot and interpret.

2. What’s the size of the pattern relative to the other candlestick patterns?

This question lets you know if there’s any strength (or conviction) behind the move.

What you want to do is compare the size of the current candle to the earlier candles.

If the current candle is much larger (like 2 times or more), it tells you there’s strength behind the move.

And if there’s no strength behind the move, the size of the current candle is about the same size as the earlier ones.

This will pretty much let you know if it’s a complete candlestick patterns or not!

And we’re just getting warmed up.

But how do you read a candlestick chart?

An uptrend in EUR/USD 4-hour:

A downtrend in USD/CAD Daily:

A range in XAU/USD Daily:

That, my friend, is how to read candlestick charts.

A major swing high/low will “stick out” in your face like a red bikini babe.

If you’re struggling to find it, then it’s probably not a swing high/low (or you don’t like girls).

Candlestick chart analysis: How to identify strength and weakness in the markets so you don’t get caught on the wrong side of the move

The market doesn’t move in one straight line.

And you can classify this “up and down” pattern into:

This is important, so let me explain…

A trending move is the “stronger” leg of the trend.

You’ll notice larger bodied candles that move in the direction of the trend.

A retracement move is the “weaker leg of the trend.

“Why is this important?”

Because in a healthy trend, you’ll expect to see a trending move followed by a retracement move.

But when the trend is getting weak, the retracement move no longer has small bodied candles, but larger ones.

This tells you opposing pressure is stepping in.

And when you combine this with another technique I’m about to show you, you can pinpoint market turning points with deadly accuracy.

Read on, I’ll tell you more…

How to “predict” market turning points with deadly accuracy

Would you like to be able to “predict” market turning points — and spot trading opportunities with low risk and huge returns?

Well, nothing works all the time.

But the technique I’m about to show you works well for me.

On the Daily timeframe, the price is at Resistance area and has a confluence of a downward Trendline.

On the 8-hour timeframe, the selling pressure is coming in as you notice the candles of the retracement moves getting bigger (a sign of strength from the sellers).

One possible entry technique is to go short when the price breaks and close below Support.

I know this can be complex for new traders, so here’s another example…

On the Daily timeframe, the price is at previous Support turned Resistance.

On the 4-hour timeframe, the selling pressure is getting stronger as the candles of the retracement move get larger.

If you want to trade this setup, you could go short on the break of Support.

Bonus: How to trade candlestick chart like a professional trader (3 powerful tips)

You’ve got what it takes to trade candlestick chart like a professional trader.

But I’m not done yet.

Because here are 3 powerful tips to help you improve your candlestick chart reading skill, fast.

#1: Higher lows into Resistance is a sign of strength

Old Rayner: “Oh look! The price is coming to Resistance, time to short this market.”

You don’t go short just because the price is at Resistance.

Because how the price approaches Resistance matters a lot.

For example, if you see higher lows coming into Resistance, it’s a sign of strength.

It tells you the buyers are willing to buy at higher prices and the sellers are unable to push price lower (than it did previously).

And this looks like an Ascending Triangle on your chart:

Can you see the higher lows approaching Resistance?

And more often than not, the price breaks out higher.

And the opposite is true.

#2: If you see a strong momentum coming into a level, it’s better to trade the reversal

When you get a strong momentum move lower, it’s because there isn’t enough buying pressure to hold up the prices — that’s why the price has to decline lower to attract buyers.

Now the entire “down move” is called a liquidity gap (a lack of interest) since not many transactions took place on the decline.

This means the market can easily reverse in the opposite direction due to a lack of interest around the price level.

That’s why you often see a strong move down into Support, and then BOOM, the price does a 180-degree reversal.

So remember, if you want to trade price reversals, always look for a strong momentum move into a level.

#3: Wait for the false break to profit from “trapped” traders

Has this ever happened to you?

“This breakout is real. Just look at the HUGE bullish green candle.”

So, you immediately go long… hoping to catch a BIG move.

But shortly after you entered the trade, the market reverses in the opposite direction!

And it doesn’t take long before you get stopped out of your trade.

So, what just happened?

Well, I call this a False Breakout.

It’s when you trade a breakout only to get “trapped” and have the market reverse against you.

“How can I profit from the False Breakout?”

Trade in the direction of the False Breakout

Let me show you an example:

Now if you want to discover more on how to profit from “trapped” traders, then check this out:

#1: Can we apply all of these to other markets like bonds or cryptocurrencies?

Yes, you can apply these concepts to other markets like bonds or cryptocurrencies.

#2: Is there a way to know for sure that it will be a breakout instead of a false break?

There’s no way to know 100% that it will be a breakout instead of a false break.

But there are a few things to consider:

If the higher timeframe is in a downtrend and the breakout is to the upside, then chances are, the breakout will fail.

Alternatively, you want to see how the price approach a level. If it approaches a key support resistance with a huge momentum in a short period, then chances are, it’ll need to take a breather and the price would likely pullback (or reverse altogether).

So here’s what you’ve learned from the ultimate guide to candlestick chart patterns today:

How do you trade with a candlestick chart?