You will learn a simple method to read candlestick patterns like a pro:

So, let’s kick things off by knowing the basics.

Candlestick patterns are a way to show prices on your chart.

Though it’s not the only way as you also have stuff like:

However, a Candlestick chart is one of the more popular approaches.

Now, when you are dealing with candlestick patterns, you must be aware of these certain price points: 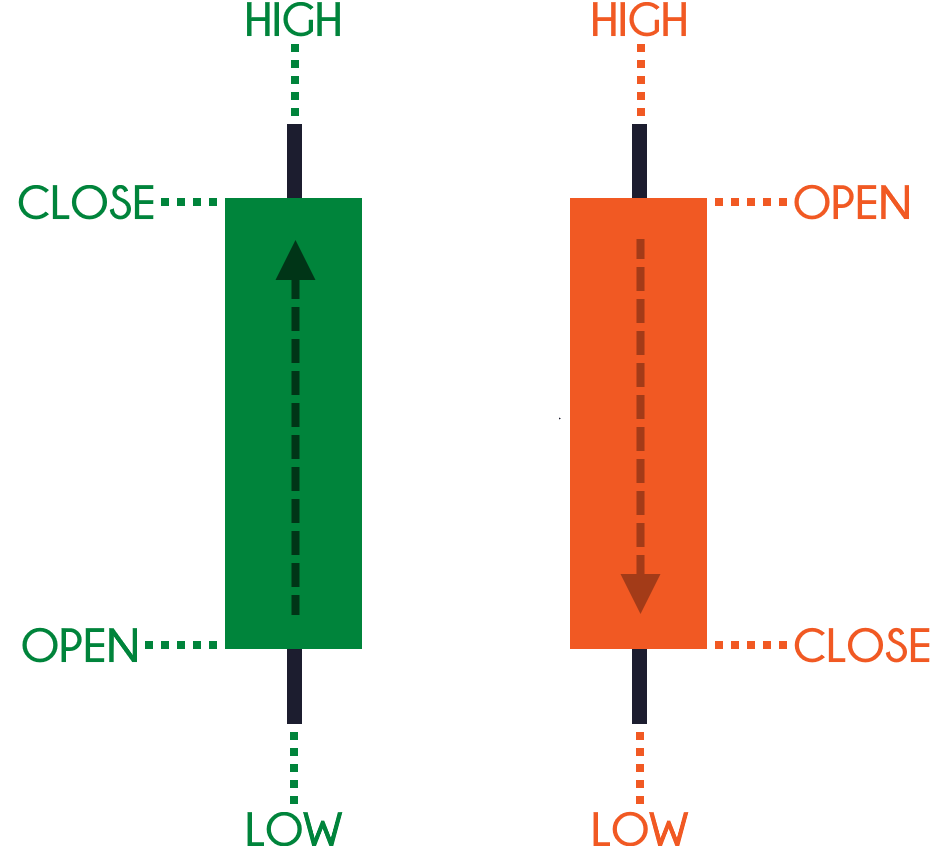 So, candlestick patterns usually have two popular colors: The green and the red bar

What’s the difference you may ask?

Let me simply show you…

What a green candle means is that the price has closed higher for the period.

So, the opening and the closing price is always here for a green candle: 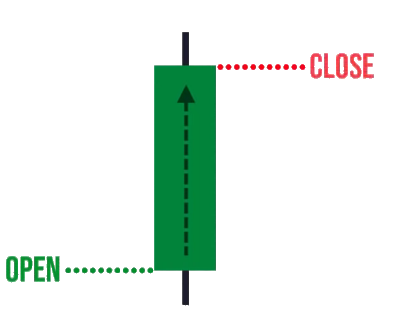 Now, the highs and lows that you see over here are what we call the “wicks.” 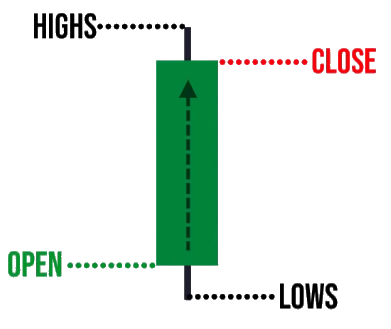 “Hey Rayner, what is a period exactly?

Candlestick patterns can be shown in different timeframes.

Whatever timeframe you desire, candlestick patterns can be shown on the respective timeframe.

For example, let’s say you’re looking at this green candle on the daily timeframe.

It means that this is the opening and closing price of the day: 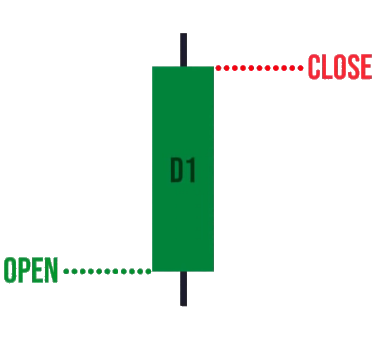 As well as the highest high and the lowest low that happened “within” the day: 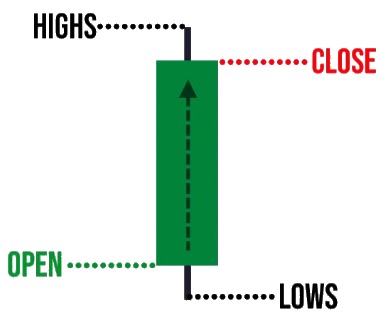 How about the red bar?

When you see a red bar, it means that the price has opened higher, and closed lower for the day: 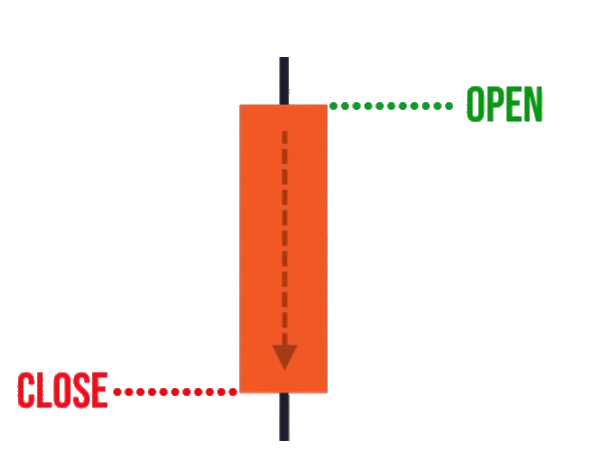 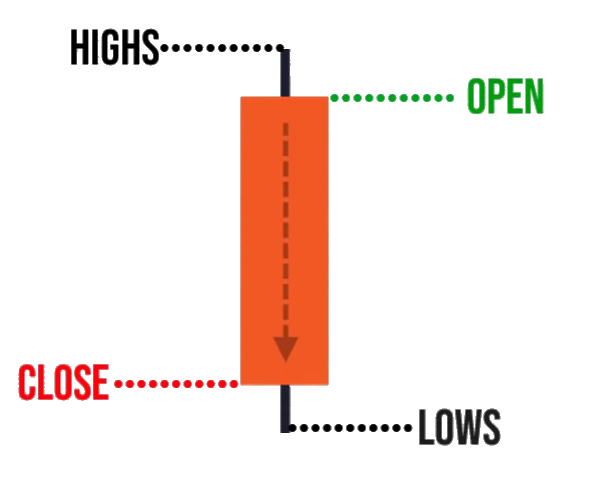 That’s the basics of Candlestick patterns and how to read them.

The problem is that there are so many patterns out there!

And if you memorize all this, you know it’s a matter of time before you get overwhelmed!

Memorizing patterns is not the way to trade the markets.

So, what’s the solution?

Ask yourself these two questions:

1. Where did the price close relative to the range

The power of this question will tell you who’s in control.

Is it the buyers who are in control? The sellers? Or nobody is in control?

Here’s how this question works: 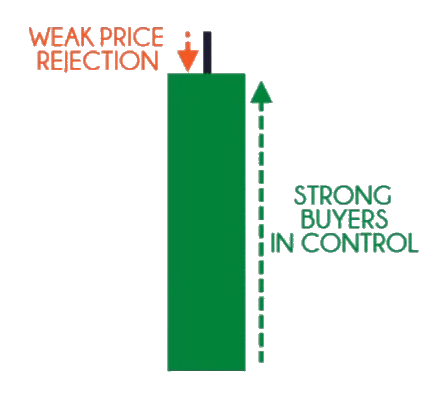 If you look at this green candlestick pattern, it tells you that the price has closed higher.

Do you notice that there is no low wick?

Well, that’s because the opening price is also the low of the day!

Now, notice that there is an upper wick over here: 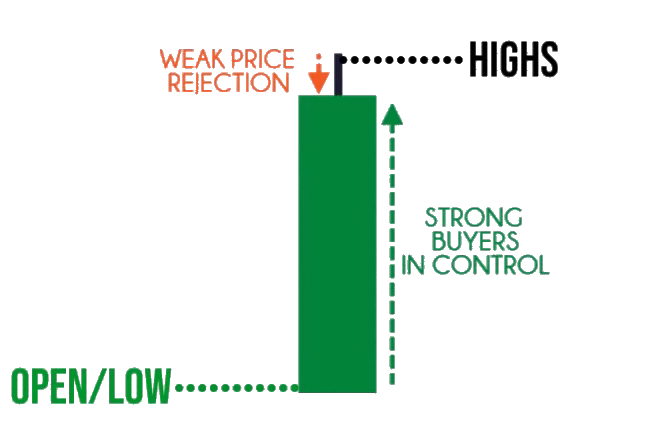 It means that this green candle closed near the highs of the range.

“Wait a minute, what exactly do you mean by a range, Rayner?”

The range simply is the distance between the highs and the lows: 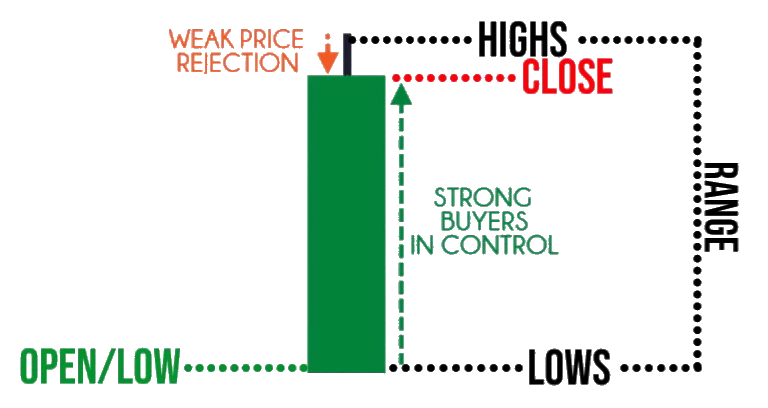 But again, notice that the price closed near the highs of the range.

This tells you who’s in control!

And who’s in control?

Because they can close the price near the highs of the range!

Alright, let me give you another important example to make more sense of this question: 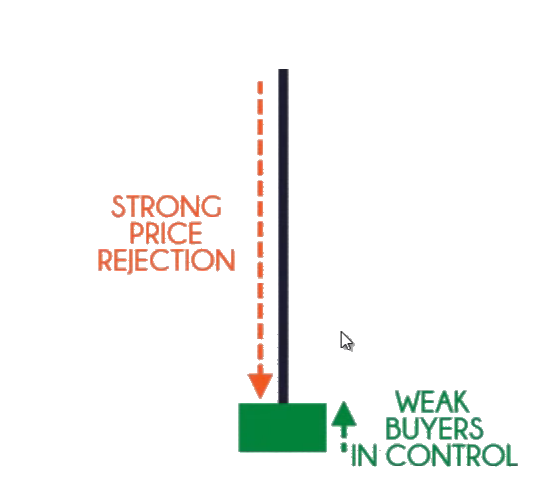 Yes, it’s still a green candle and the price still closed above the opening price.

But let me ask you:

Are the buyers still in control?

Again, just use this question: Where did the price close relative to the range?

As you can see, the price closed over here: 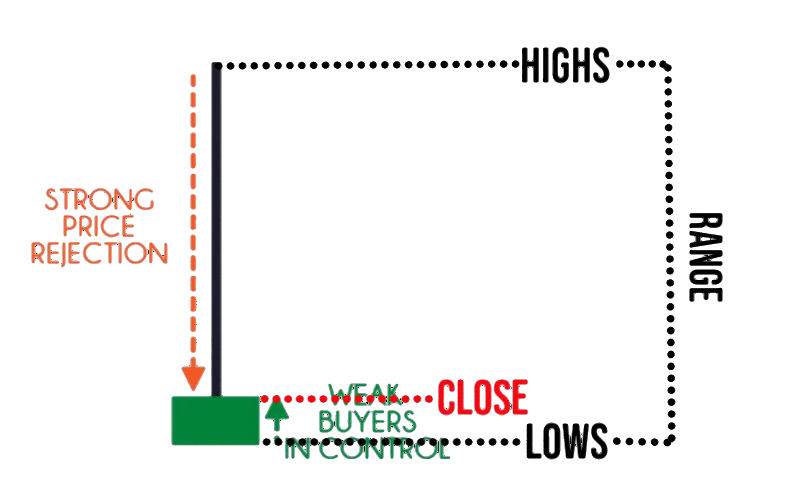 Now, we are seeing a different picture than the previous example!

Because now you realize that the price only closed marginally higher relative to the range.

What does it tell you?

It tells you that at one point in time the buyers are trading near the highs just like the example I showed you a while ago: 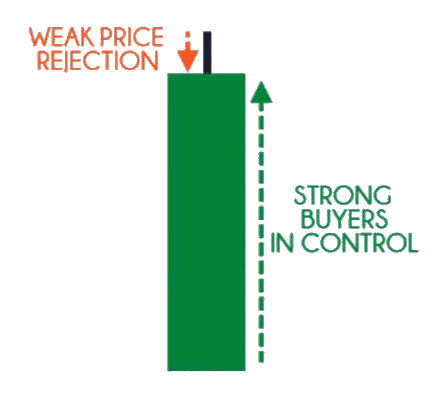 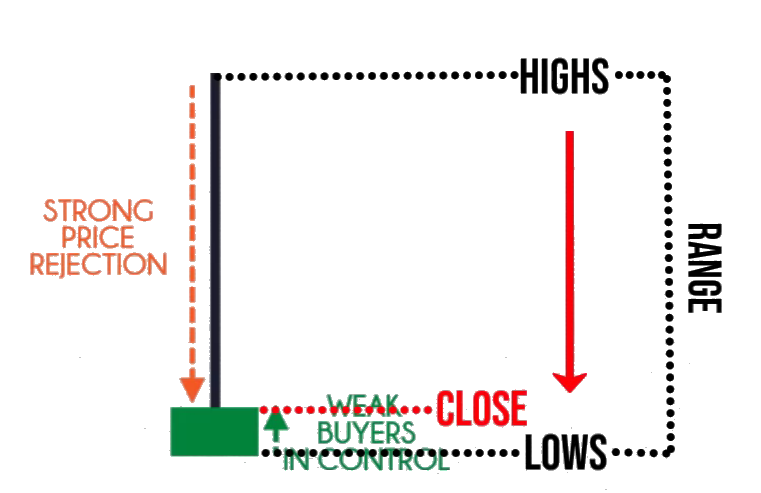 This tells you that there is selling pressure lurking around; it is a sign of weakness.

So, to answer the question…

It should tell you that the sellers are in control.

So, here’s the second question…

2. What’s the size of the pattern relative to the earlier ones?

This question tells you whether there’s a real strength behind the move.

If you look at this chart: Notice that it is currently on a retracement and it has made a bullish close.

It tells you that the buyers are in control!

But if you look at the most recent candle over here: 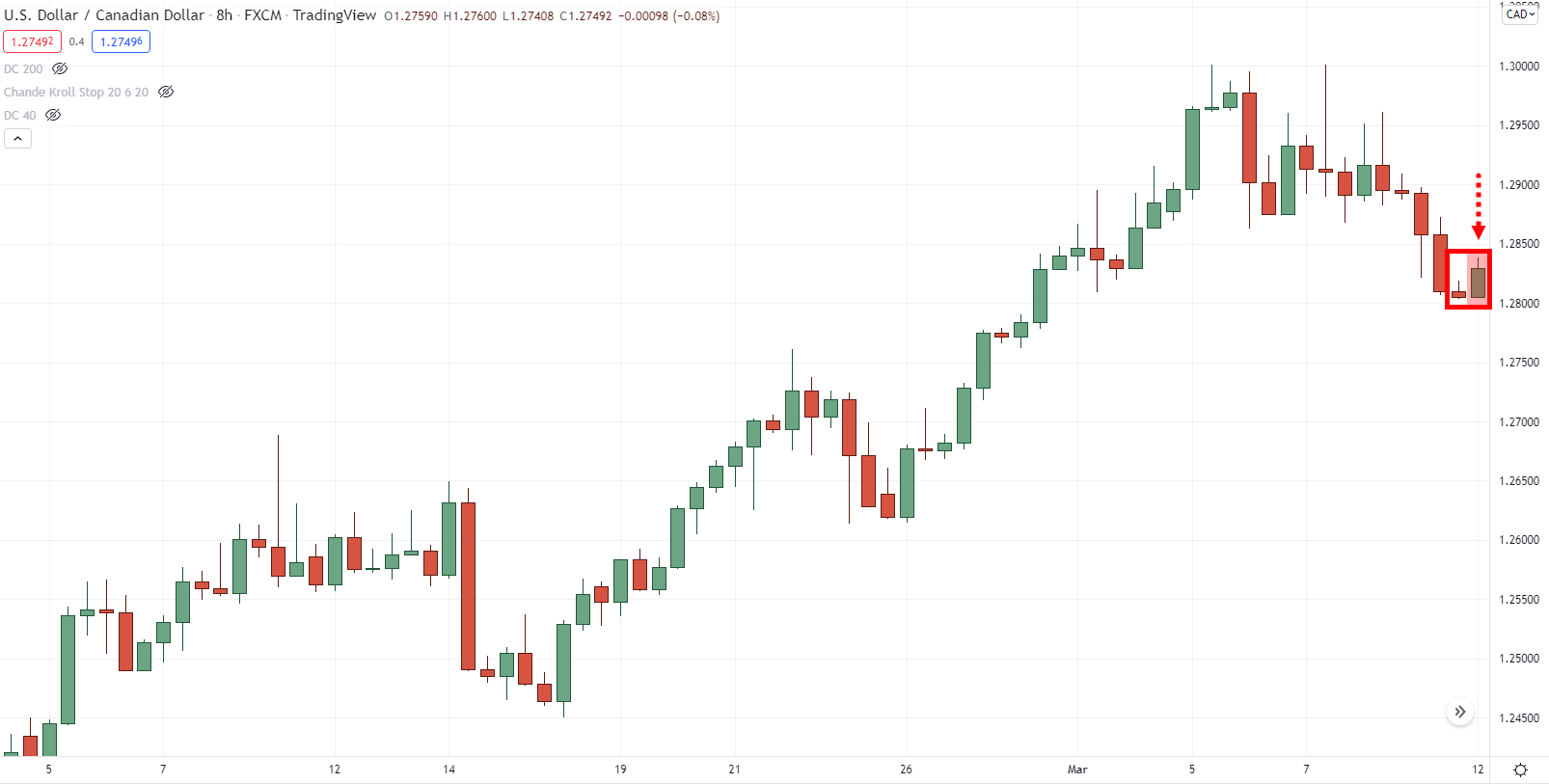 Relative to the earlier candles, you notice that the range of this candle doesn’t signify much.

It’s not large compared to the earlier candles!

This should tell you that there isn’t any strong buying conviction behind this candlestick move.

However, if you look at this chart over here, look at the size of the candlestick relative to the earlier ones… 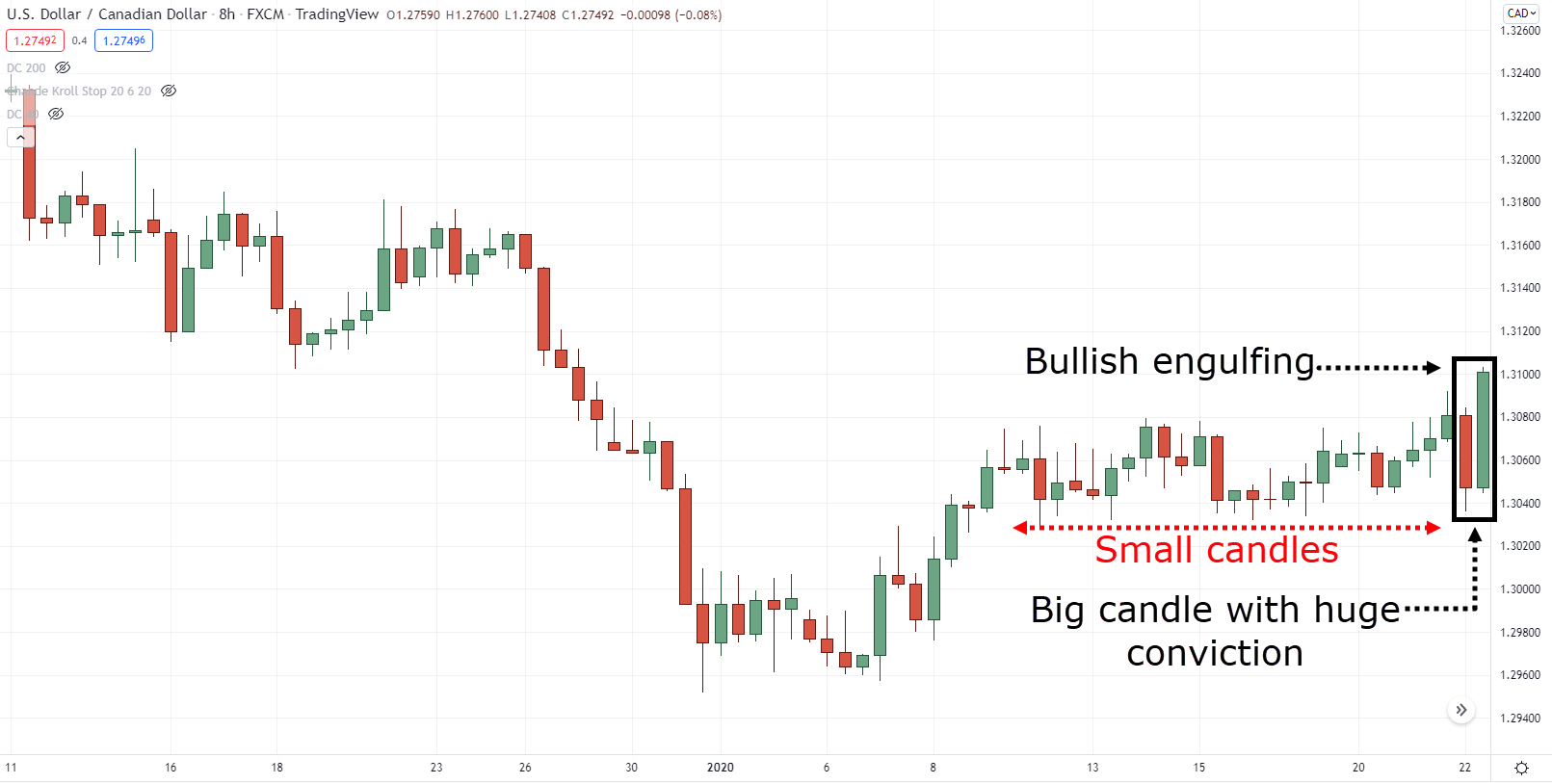 This tells you now that not only on the buyers in control but there is also strong conviction behind the move!

Can you see where I’m coming from?

So, once you understand these two questions, then you pretty much can read any candlestick patterns you come across.

Now, before we end today’s training guide he’s a bonus lesson for you…

You can combine them across different timeframes and visualize what the pattern will be on the higher time frame.

Then let me give you an example: 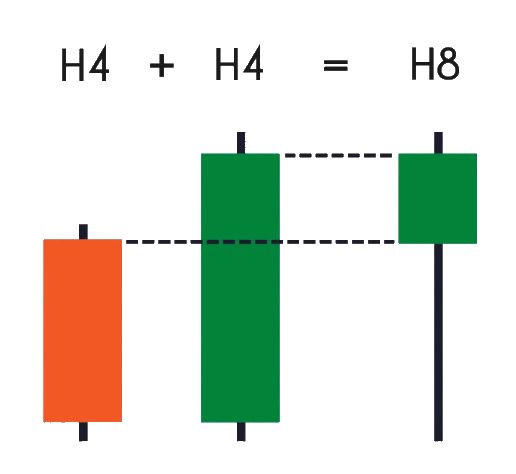 So, if you look at this pattern on the 4-hour timeframe you have a bullish engulfing candlestick pattern.

But when you go up to the 8-hour timeframe you will realize that the candlestick pattern will look something like a hammer!

The opening and closing price of the 4-hour timeframe would look something like this while the 8-hour candle is forming: 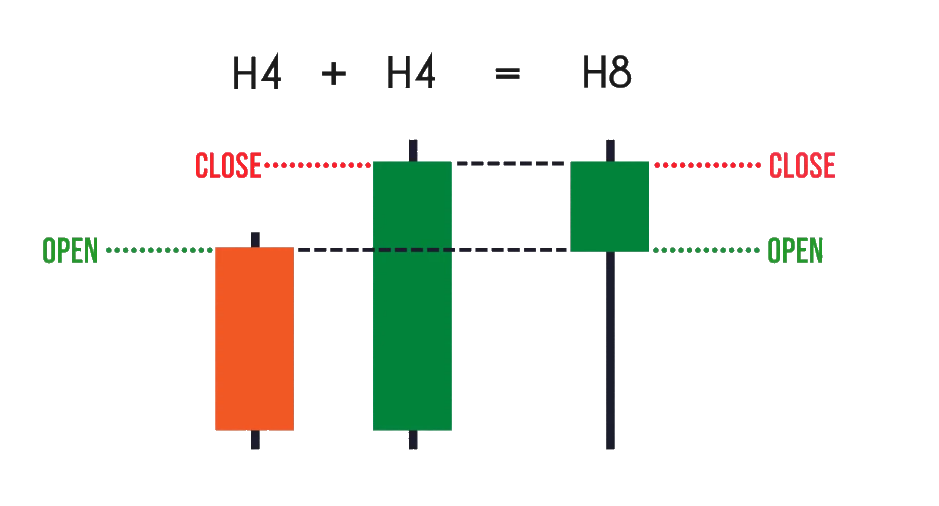 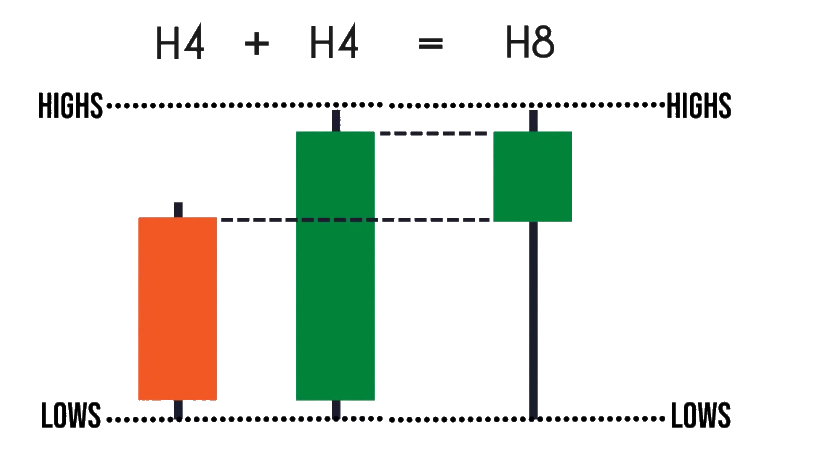 Sometimes, if you are looking at the chart and you don’t quite understand what’s going on:

“One candle is green and one is red, what now?”

What you have to do is just combine two Candlestick patterns and you will have a clear understanding of who’s in control.

Let me give you an example of a real chart, shall we?

So, for example, you look at this chart on USDCAD 4-hour timeframe: 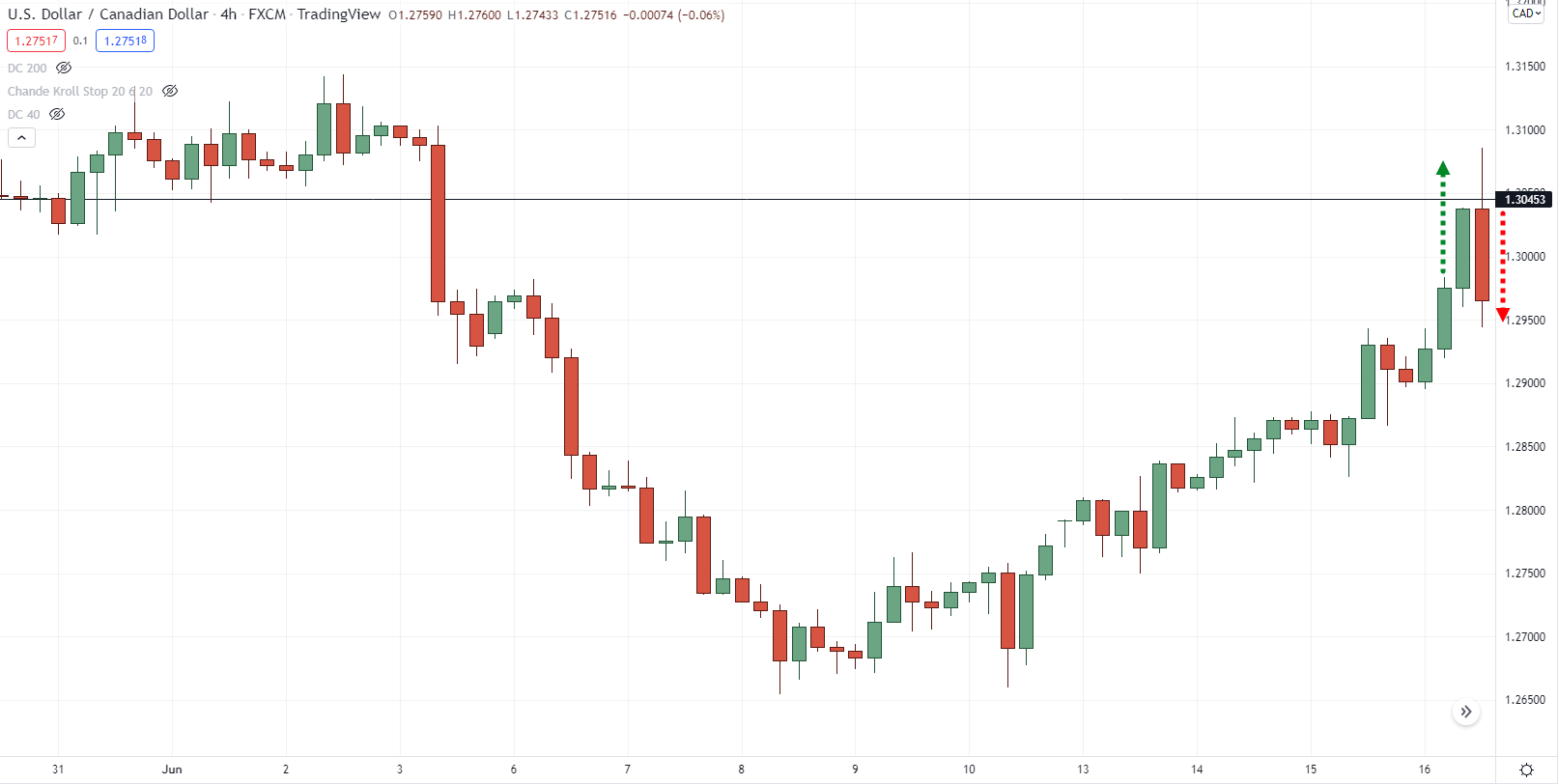 “Man, Rayner look at this Rayner this is so confusing!”

“One moment the candle is green next moment is red, so should I buy or should I sell?

Alright chill, just do I just share with you earlier.

Take the opening, closing, highs, and lows of this candle: 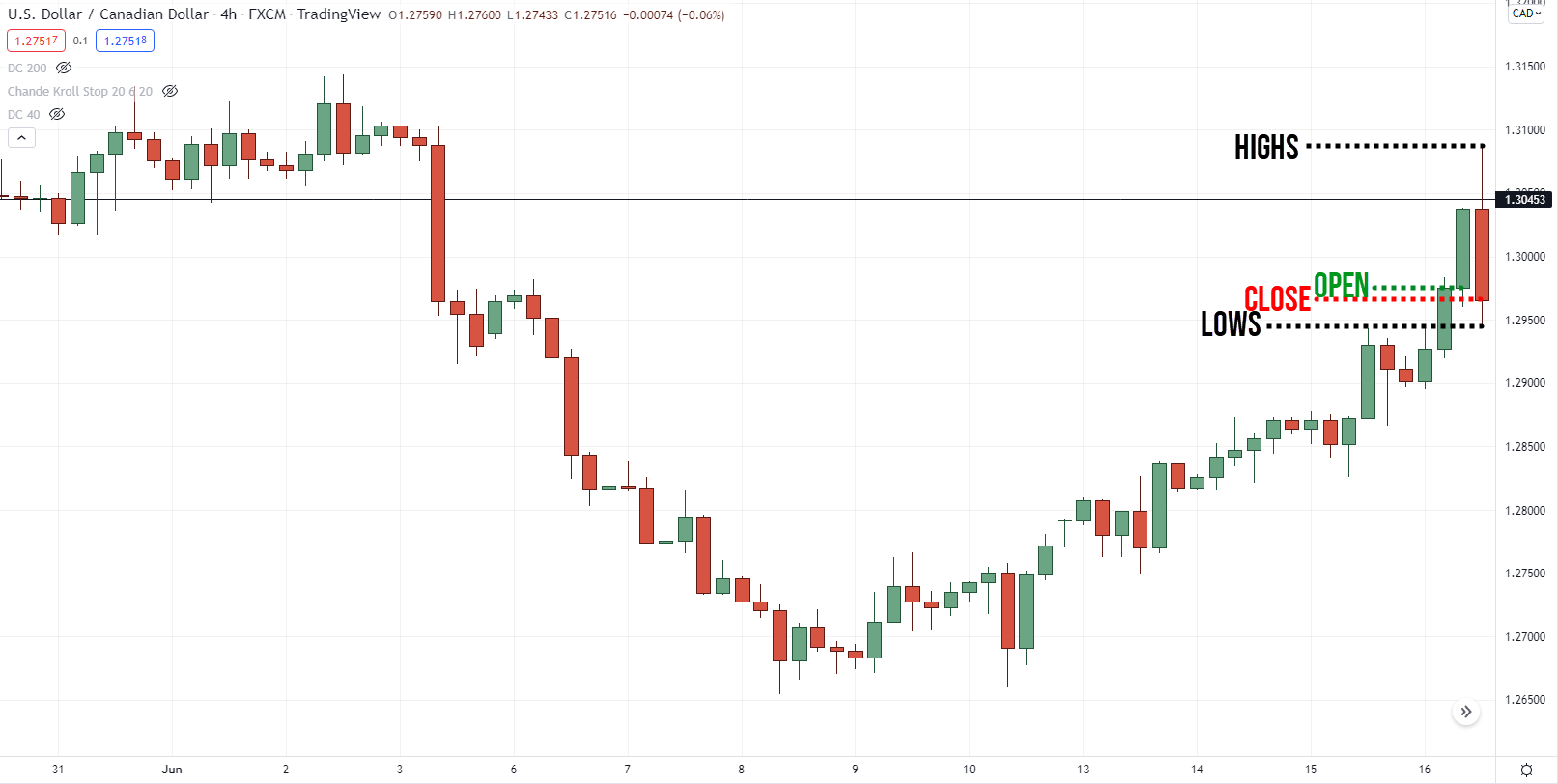 And if you visualize this information on the higher timeframe…

The information would give you this: 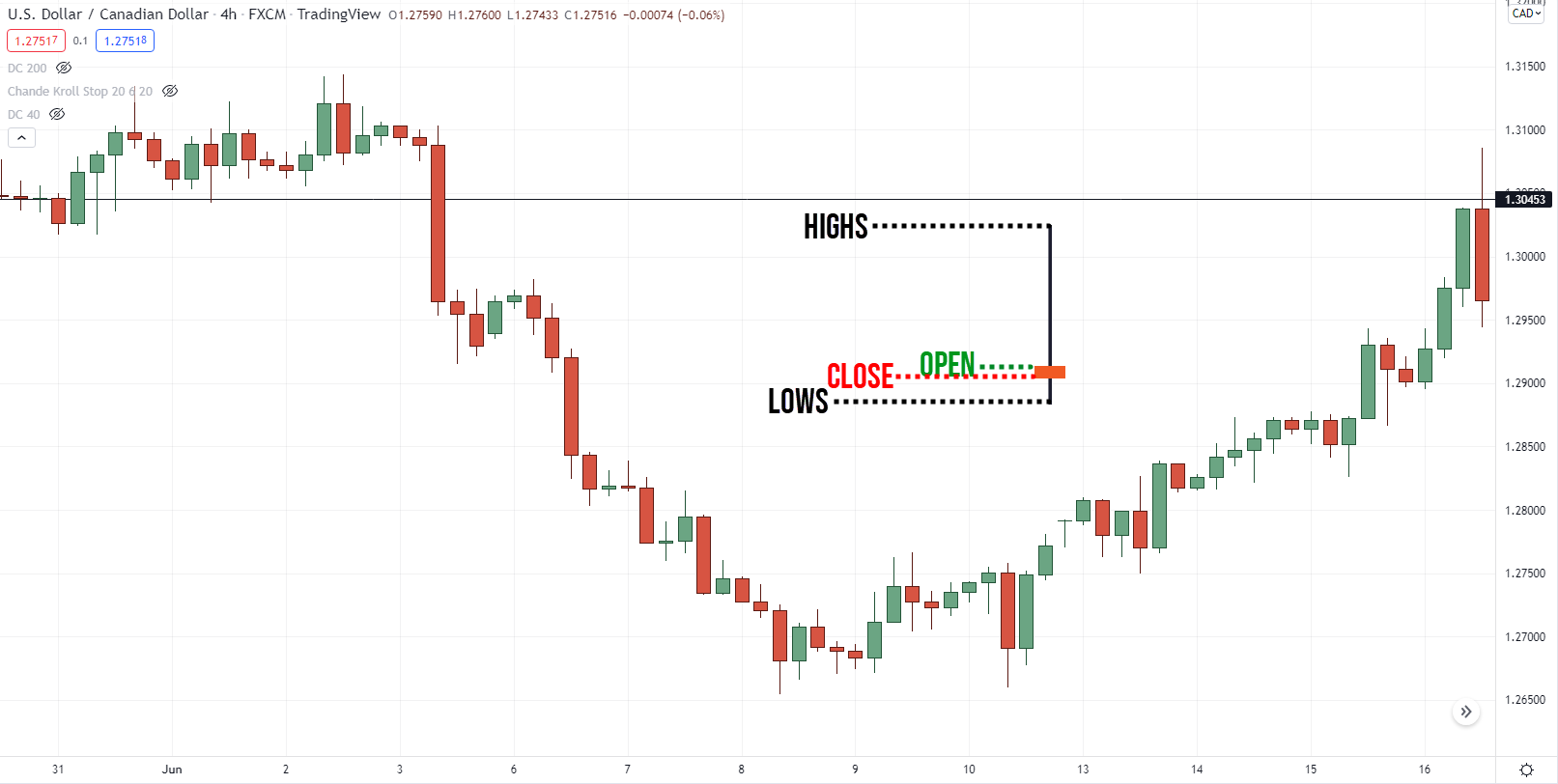 So, the candles you’re seeing on the 4-hour timeframe: 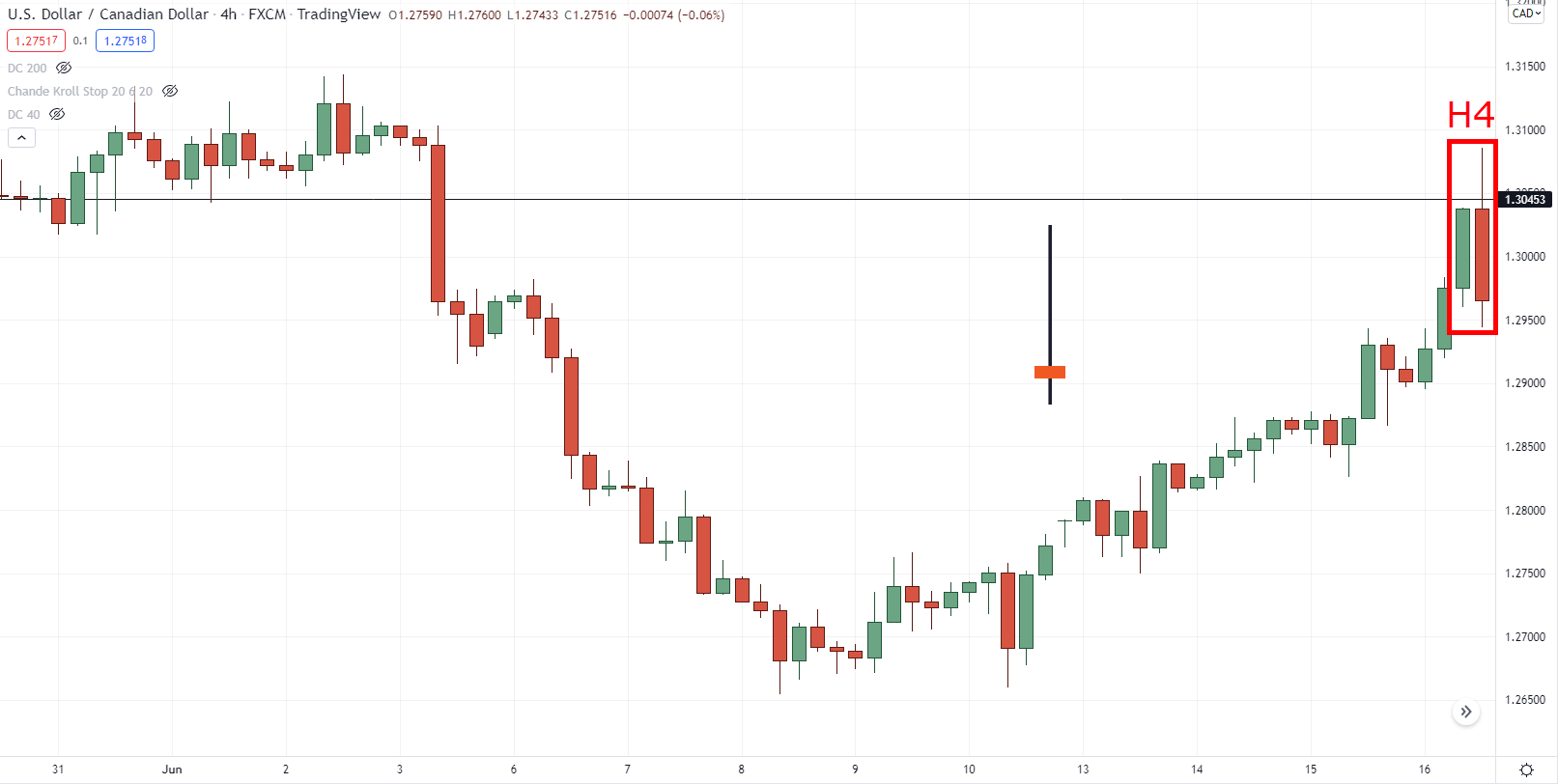 Shows a price rejection on the 8-hour timeframe: 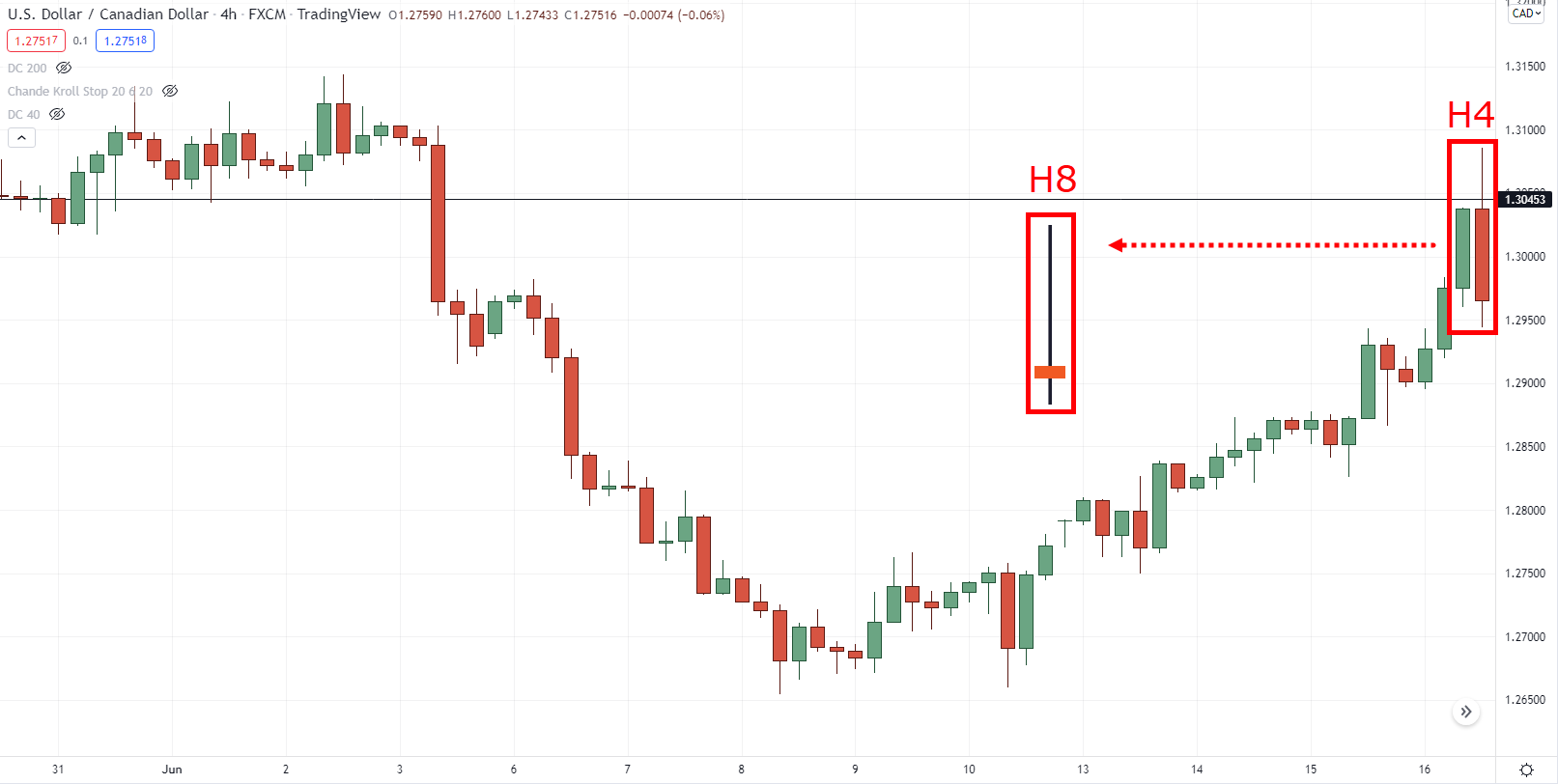 There you have it!

That’s how you combine candlestick patterns to make sense out of something that you’re not quite sure of.

So, let’s do a super quick recap about today’s topic on candlestick patterns…

I’ve come to the end of this training.

So, this time, I want to hear from you…

What candlestick patterns do you often use?

How do you use candlestick patterns in your trading?

Let me know your thoughts in the comments below!

How can I identify that, how long that trend will sustain. For eg. If sellers are in control in 20-min time frame. Then shall I use any 20/50/100 SMA to know the continuing trend duration?

I love the way you teach and clarify on this important topic, it’s brief yet very impressive, thank you so much, Rayner. God bless you.

Thank you so much for this rayner

Now I know how to interpret candlestick patterns without ever getting confused on what to do. I really appreciate u sharing all this info with us for free. You’re the best & God bless u

This was an interesting point to know…yes the candlesticks give a picture of who is in control of the market. Daily time frame, weekly time frame too works on a similar concept…