In this video, you'll learn how to trade the Flag pattern.

What is a Flag pattern

I define a Flag pattern using these two criteria:

2. Followed by a weak pullback, usually shown by small-bodied candles.

You can see over here, this is a strong trending move followed by a weak pullback.

This is what I consider a bullish flag pattern.

Small bodied candles and it's a very weak pullback.

And a Bearish flag is just the opposite:

When is the best time to trade Flag pattern

In my opinion, there are two times which I find favorable to be trading these patterns:

When the market just had a breakout

Let's say the market is in a range, and then finally it broke down.

When it breaks down, the best time that you want to trade the Flag pattern is on the first pullback.

When you see a bearish flag pattern that is forming, this is the best time to trade the Flag pattern.

It's because the traders who miss the move will be waiting for a pullback.

You can be sure that when the market pulls back when this flag pattern is being formed, there are traders looking to short this market having missed the earlier move.

So they're trying to catch the trend!

This is why I personally like to trade the first pullback or the first flag pattern when the market just had a breakout.

It's usually when the market is trending strongly, trading above the 20-period moving average...

These are all possible opportunities to trade to a pullback in the form of a flag pattern!

How to trade the Flag pattern (Long)

First and foremost, let's talk about the long side of things:

Entries: Break above the high

You can wait for a candle to close or you can go along with a buy stop order.

Whichever approach you're more comfortable with, stick with it.

Stop loss:  1 ATR below the low of the flag

I typically set my stop loss 1 ATR below the low of the flag to give it some buffer.

So that I don't get stopped up prematurely.

Exit: Moving average to trail your stop loss or use the structure of the market

For Flag patterns, I would suggest that you try to ride the trend.

Because flag patterns typically occur just after a breakout or in a strong trending market.

For me, I like to trail my stops to ride the move as much as possible when I trade a Flag pattern.

This means that I don't have fixed target profits or whatsoever.

And then your exits, you can either use a moving average to trail your stop loss.

Or as the market makes higher highs and higher lows, you can just trail it using the previous low!

With that said, let's have a look at a few examples: 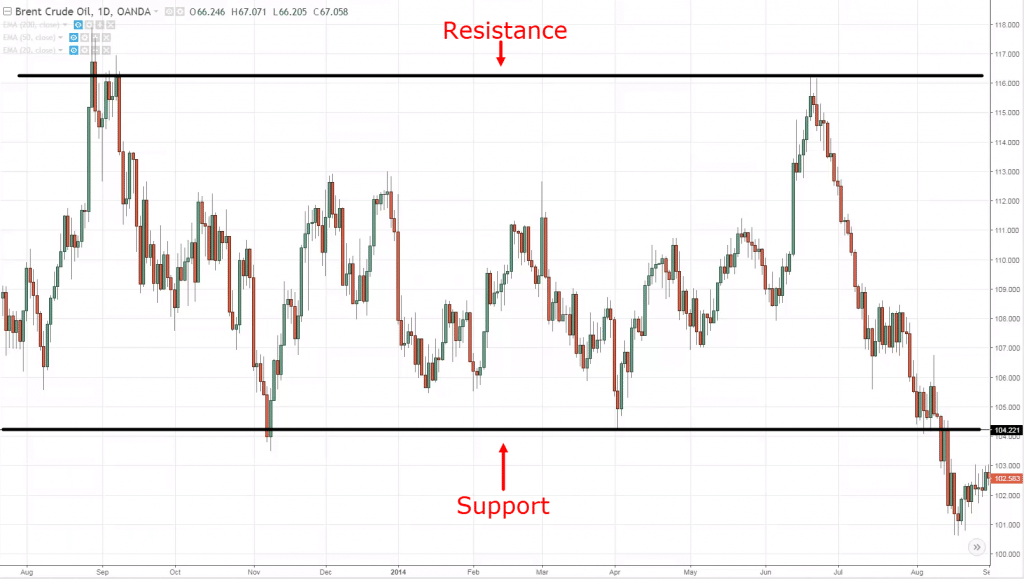 You will notice that crude oil basically has been in a long-term range!

For a good one or two years.

We can see that the crude oil broke this area of support.

And then forms a potential flag pattern: 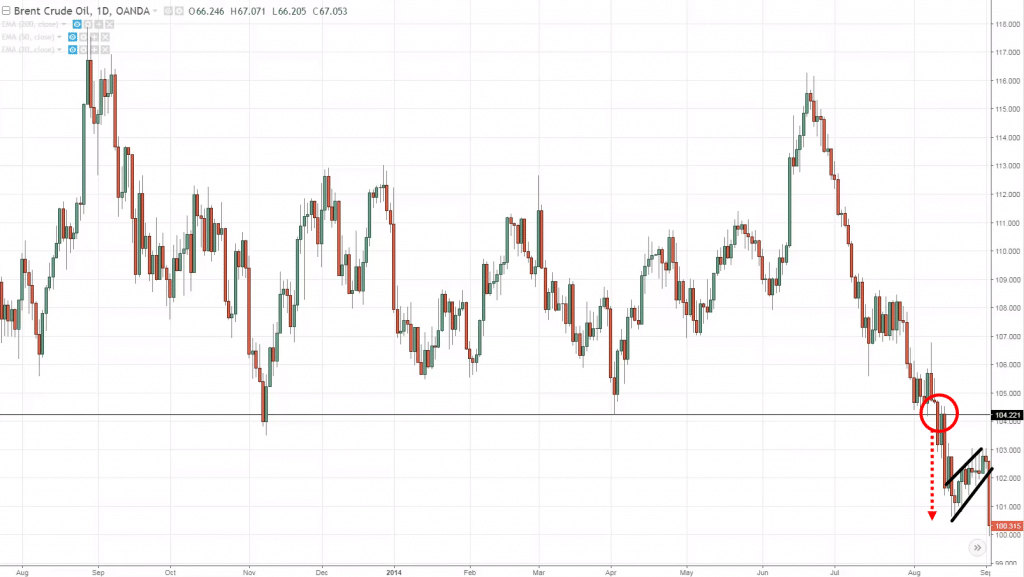 Again, two ways you can look to enter this trend.

You can place a sell stop order below the low of the Flag.

Or you can wait for the market to break and close below the low.

Let's say your entry got triggered.

Stop loss would be one ATR above the high.

And your entry is when it closes below the bearish Flag!

For trailing stop loss, you can use moving average or structure of the markets to catch a potential trend!

And you can see that in this case, you will pretty much ride the entire move towards the downside.

And only exit when the market breaks and close above the 50-period moving average: 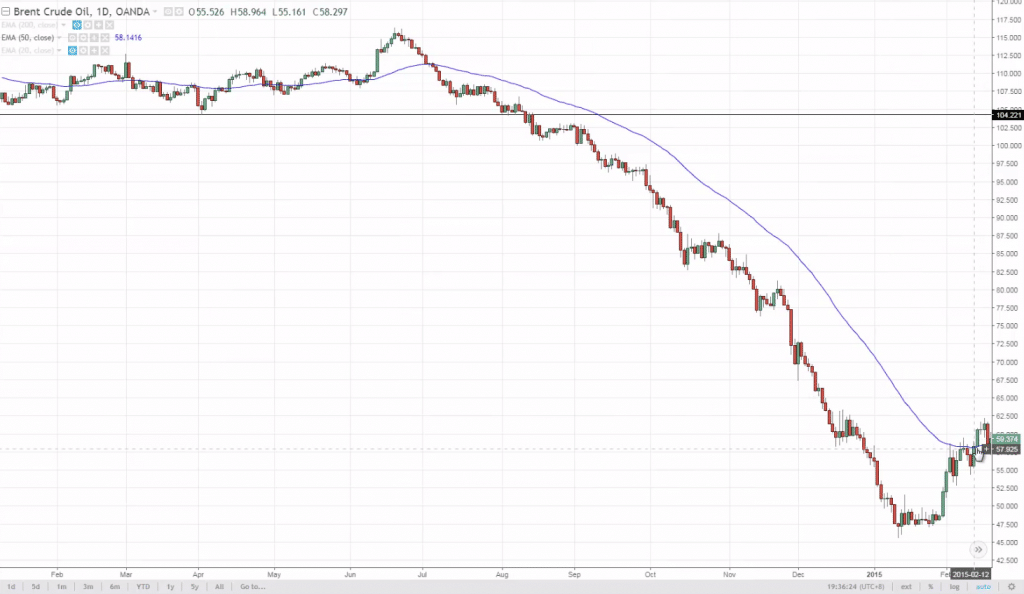 This obviously a cherry-picked example.

You won't regularly catch such a huge move.

This is more of something that you shouldn't expect to occur regularly.

But once in a while, you do catch huge moves like this.

So, this is something that I want to point out.

It's not a regular occurrence so don't think that every trade will be something like this.

Alternatively, if you don't want to use the moving average, you can use the structure of the market where you went short, and then trailing the previous high. 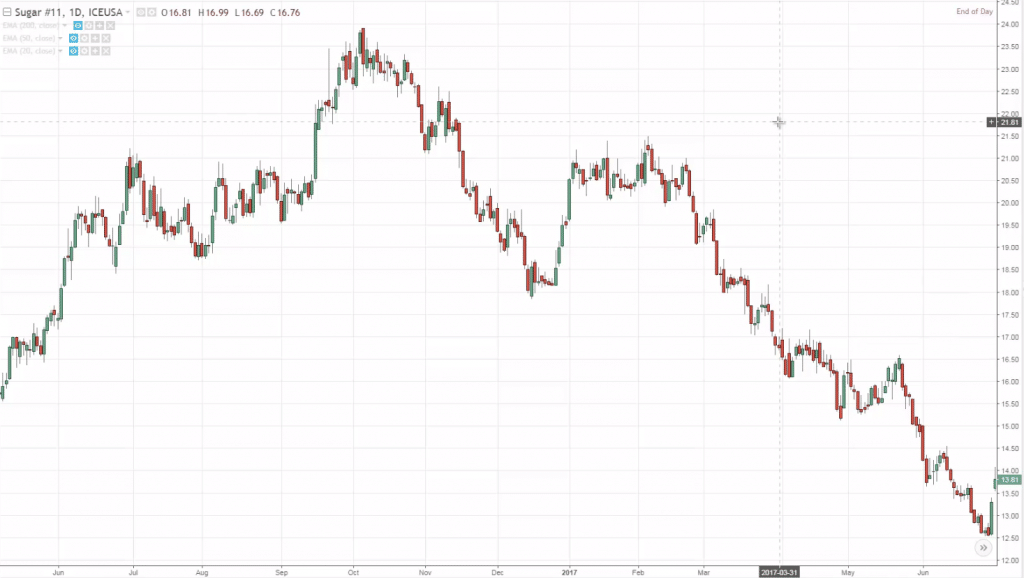 This one is more of not a breakout example but in a strong trending market.

You can see that sugar is pretty much in the strong trending market forming a series of higher highs and lower lows.

There are a few bearish Flag patterns that you could have traded: 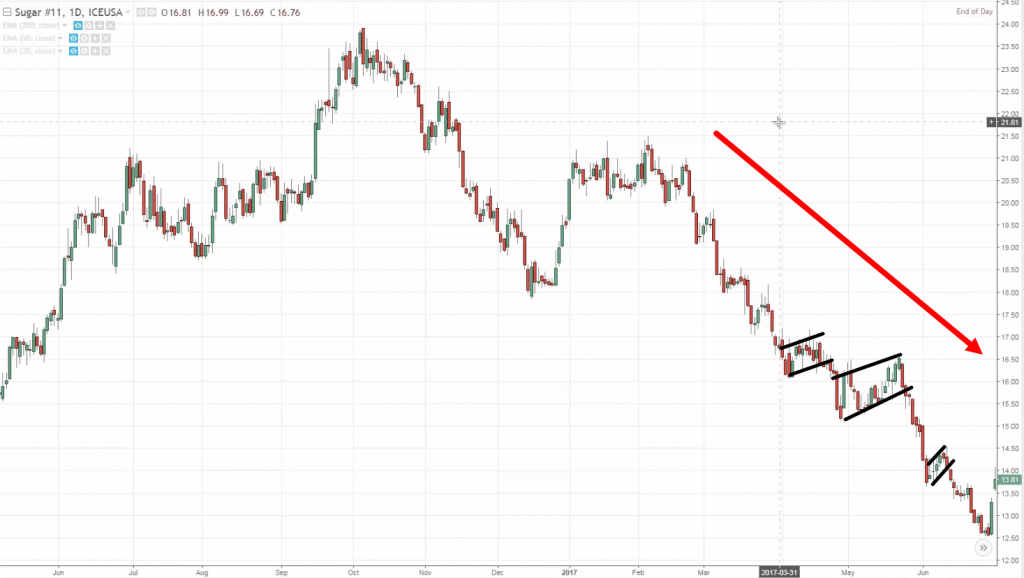 Again, the concept, is the same.

Go short on the break of the lows.

Your stop loss will be one ATR above the high.

If you want to trail with your 50-period moving average, you also can.

Another one is EUR/USD: 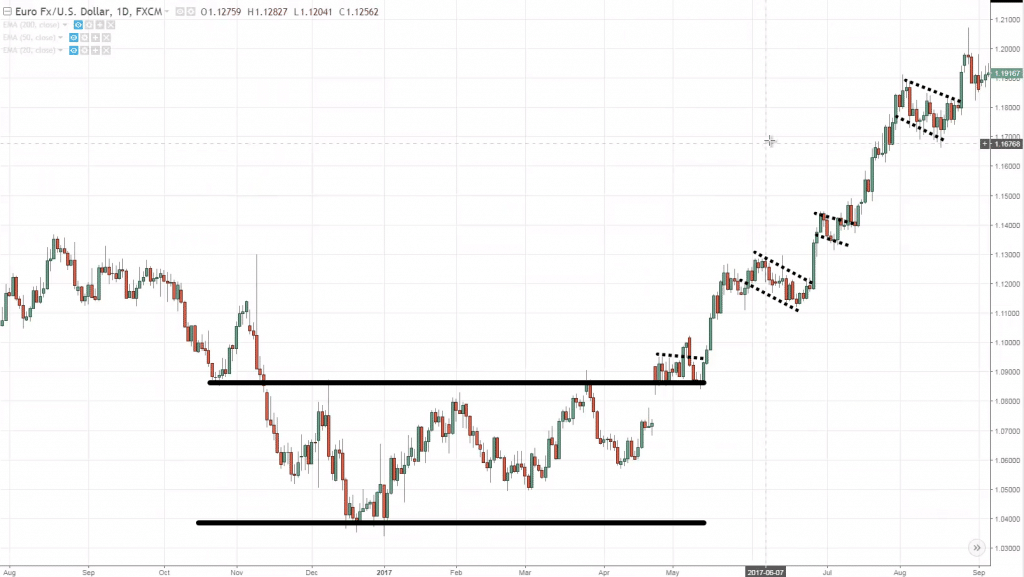 You can see that this market pretty much in a range.

It breaks out of the range, then it forms a Flag pattern!

You could have gone long on a break of the highs, and stop loss one ATR below the low of the Flag.

Even if you've missed this move, I would say there are more opportunities that will come later.

Like I said, if the market just breaks out, the best flag pattern to trade is the first pullback.

This will be the best time to trade the Flag pattern.

Of course, if you missed it, there's always opportunities to come later!

But you'll be entering naturally at the higher prices.

So, let's say, for example, you didn't catch the first Flag after the breakout.

You got in at the second one which is this second flag pattern: 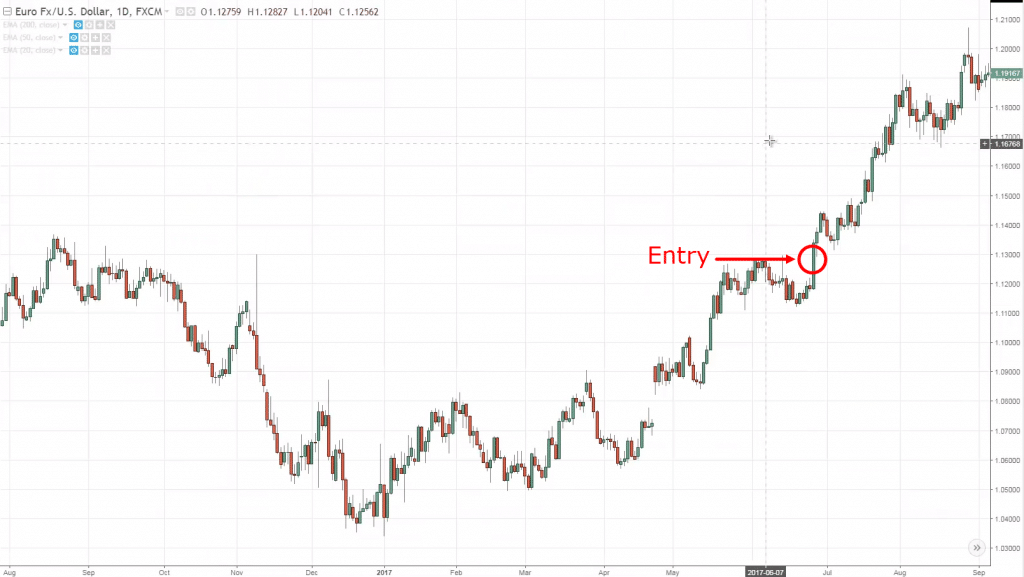 You set your entries above the high of the Flag pattern.

Again, stop loss is one ATR below this low:

What we do is just calculate this low – minus 80 pips and that would be your stop loss.

So how do you actually trail your stops?

As I said, you can use a moving average.

Let's use the 50-period moving average.

And you can see that you will have to ride the move until the market breaks and close below the low: 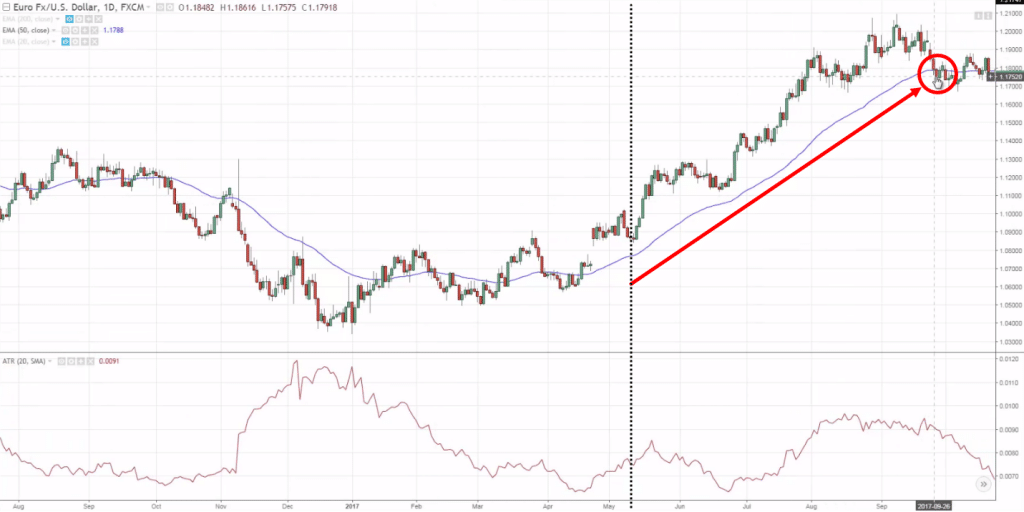