I want to introduce you to a formula called the M.A.E.E formula.

Let’s get started and unpack the MAEE trading formula.

Let’s start with the first part of MAEE trading formula.

Generally, when you trade the markets, it can be broken down into three main categories:

Once you’ve identified the market structure, it doesn’t mean you buy immediately.

You don’t want to buy just because the market is in an uptrend.

You don’t want to sell over here just because the market is in a downtrend.

Because you want to look for an area of value.

A – Area of value

Let’s talk about an uptrend.

A few possible areas of value could be this one over here where the price retests previous resistance now turned support. That’s one possibility of an area of value.

The uptrend market does a slight consolidation and retest this previous area of support, this is another area of value.

An example on GBP/JPY to find an area of value (MAEE trading formula): 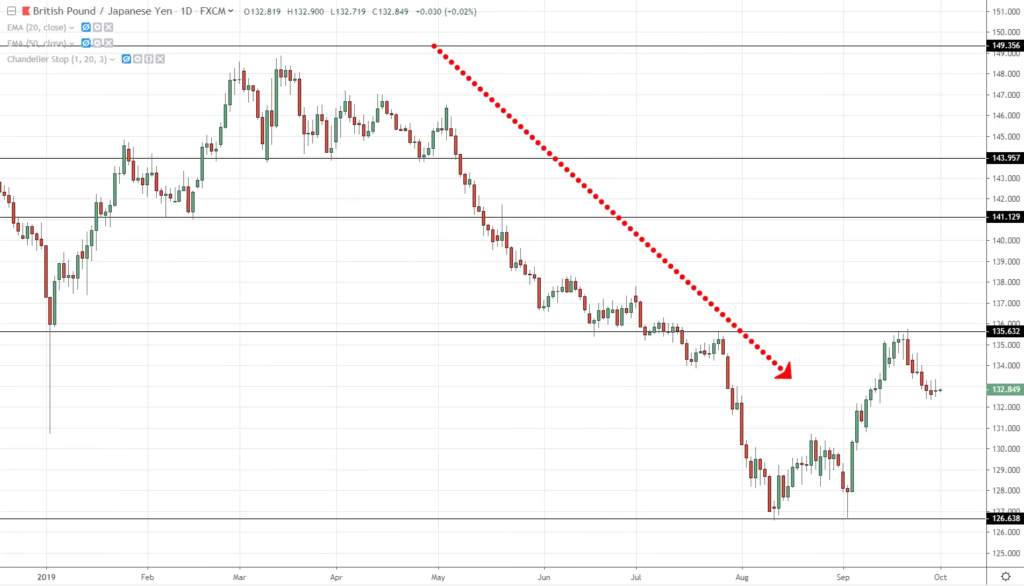 The market is in a downtrend, where is an area of value such as support and resistance? 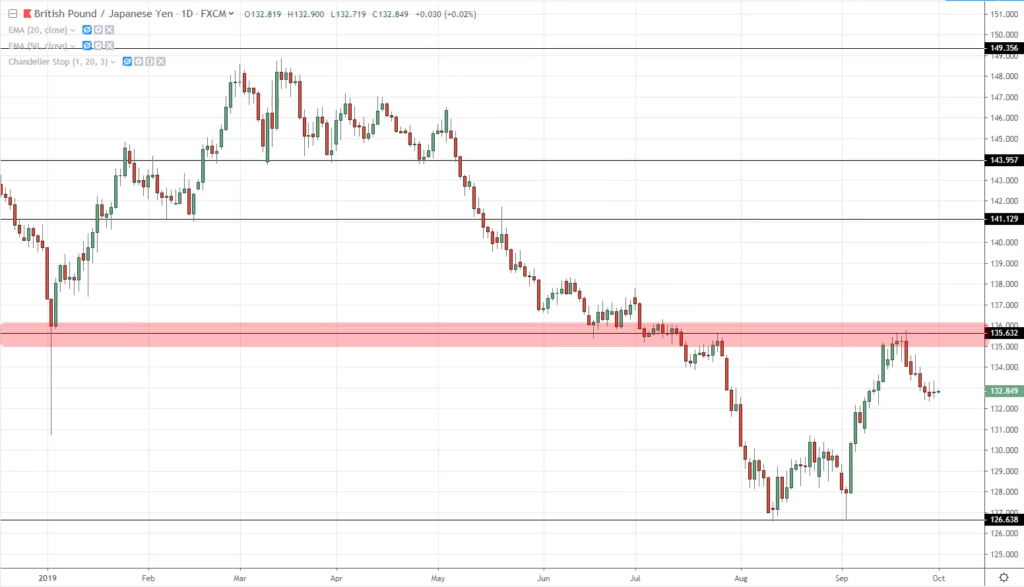 Remember that it’s an area of value. It’s not a line of value. So you’re dealing with an area on your chart.

There are numerous ways to define your area of value and I want you to be aware of it.

Now you have got your market structure and an area of value.

An area of value can also be in the form of a moving average or a trendline.

An example on T-Bond to find an area of value (MAEE trading formula): 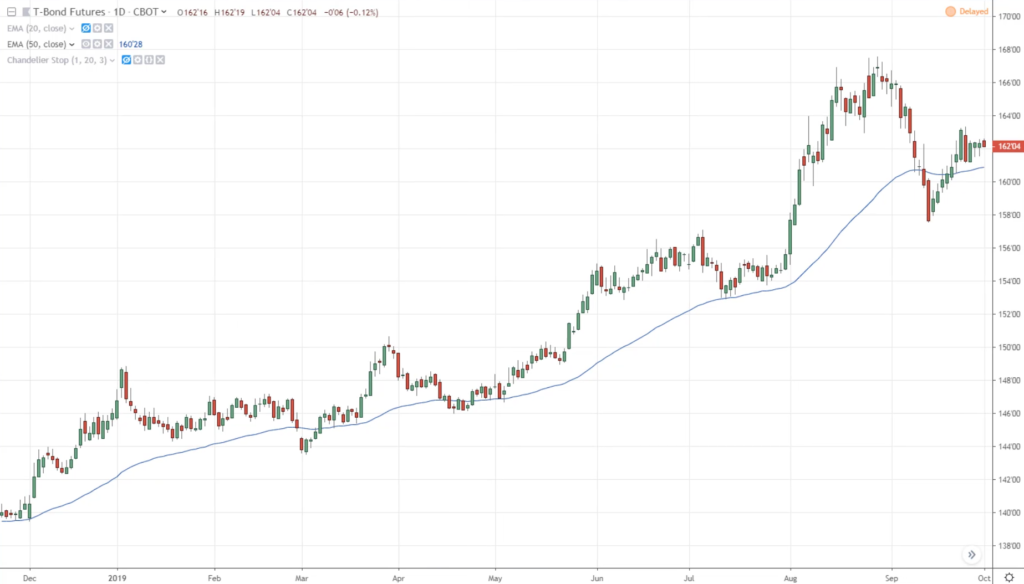 The market is in an uptrend and if you pull out the 50-period moving average, you’ll notice that the price tends to respect the moving average.

In a healthy trend, the price tends to respect the 50-period moving average. 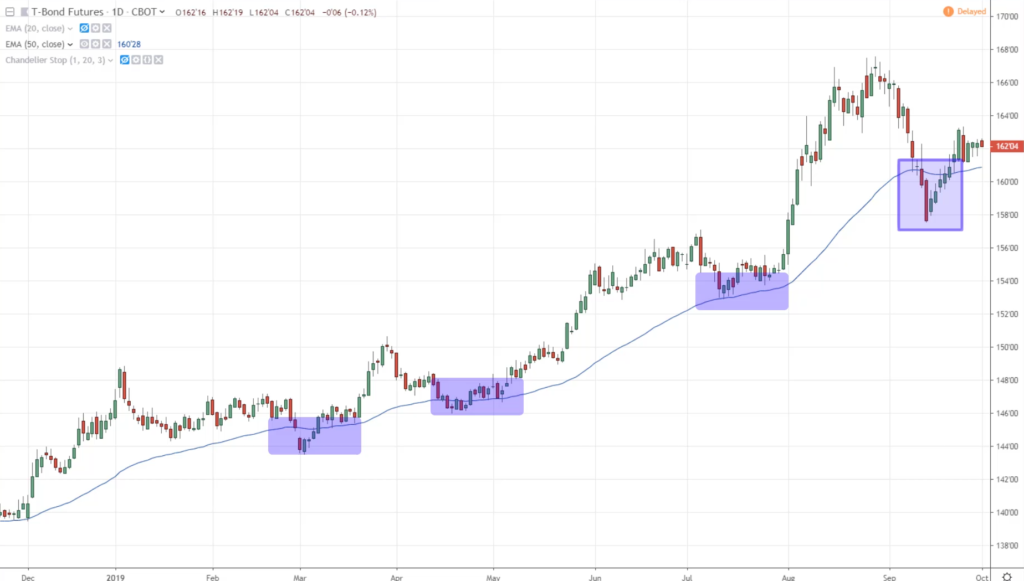 This is where we move onto the entry trigger.

An entry trigger is simply a signal to get you into a trade.

A couple of other things you want to pay attention to are:

These are the patterns that you saw earlier when I talked about “Mistakes that traders make”.

For a hammer, the price opens at this level. Then the sellers came into control and push the price down lower to these lows.

Finally, the buyers come in to push the market back up higher towards the highs and finally, the price closed near the highs of the period. This is how you get the hammer.

The story of a bullish hammer in essence is:

It’s a similar story. You can see that on the first candle, the price open at the top and then closes near the lows of the period.

The second candle opened near the lows where the sellers tried to push the price down near these lows, but that’s as far as they could go before the buyers pushed the price up, closing near the highs.

The bullish engulfing pattern tells you that the buyers are temporarily in control. 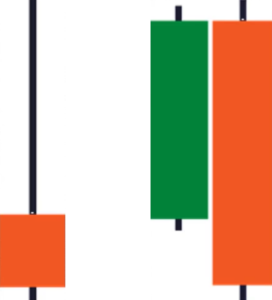 Bearish patterns are just the opposite.

This simply tells you that the sellers are in control and what you’re seeing is price rejection of higher prices on your chart.

These are useful entry triggers to enter a trade.

There are many ways you can go about setting your stop losses and profit levels.

This is basically where you set your stop loss.

I’ll share with you an approach that has worked well for me which you can verify for yourself.

Let’s say a market is in a range. It comes down near these lows, and breaks out higher, closing above support.

When you set your stop loss, where do you set it?

You don’t want to set your stop loss at an area of value. Why?

Because we are trading from an area of value, and this is where potential buying pressure could come in and push the price up higher.

If you put your sell stop order there, you could get caught out of the trade because it is an area where potential buying pressure could come in. It’s an area on your chart and you want to give the trade room to breathe so you don’t get stopped out too early.

My approach is, I set my stop loss away from the area of value.

There are many ways you can do this depending on your trading goals, whether you want to capture a swing or ride a trend.

Let’s focus on swing trading. Let’s say you just want to capture one swing in the market before the opposing pressure comes in.

The market is in a range and you bought near the lows over here:

Ask yourself, if you’re buying near support, where would selling pressure come in?

Chances are, selling pressure is going to come in somewhere near this area of resistance.

When you take profit, you just want to exit just before these highs and capture this portion of the move, just this one swing.

If the market swings up higher, you’ll exit the trade by capturing this one swing over here.

This is where you exit your trade just before opposing pressure comes in.

An example on GBP/USD to apply the MAEE trading formula: 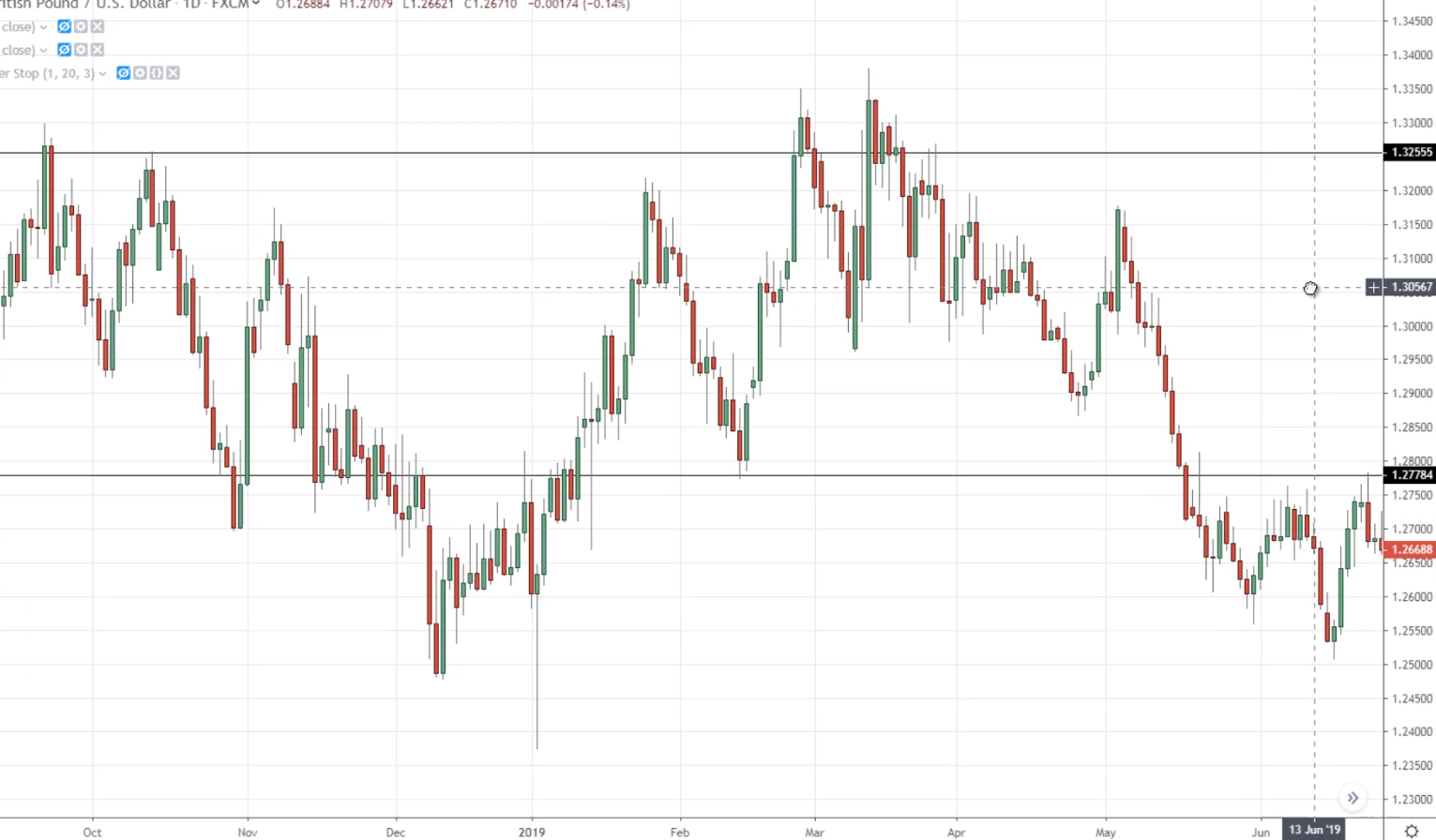 These are trades that I made and are cherry-picked to explain these examples. Take note that there will be winners and there will be losers. Trading is not a 100% thing.

The trend is down: 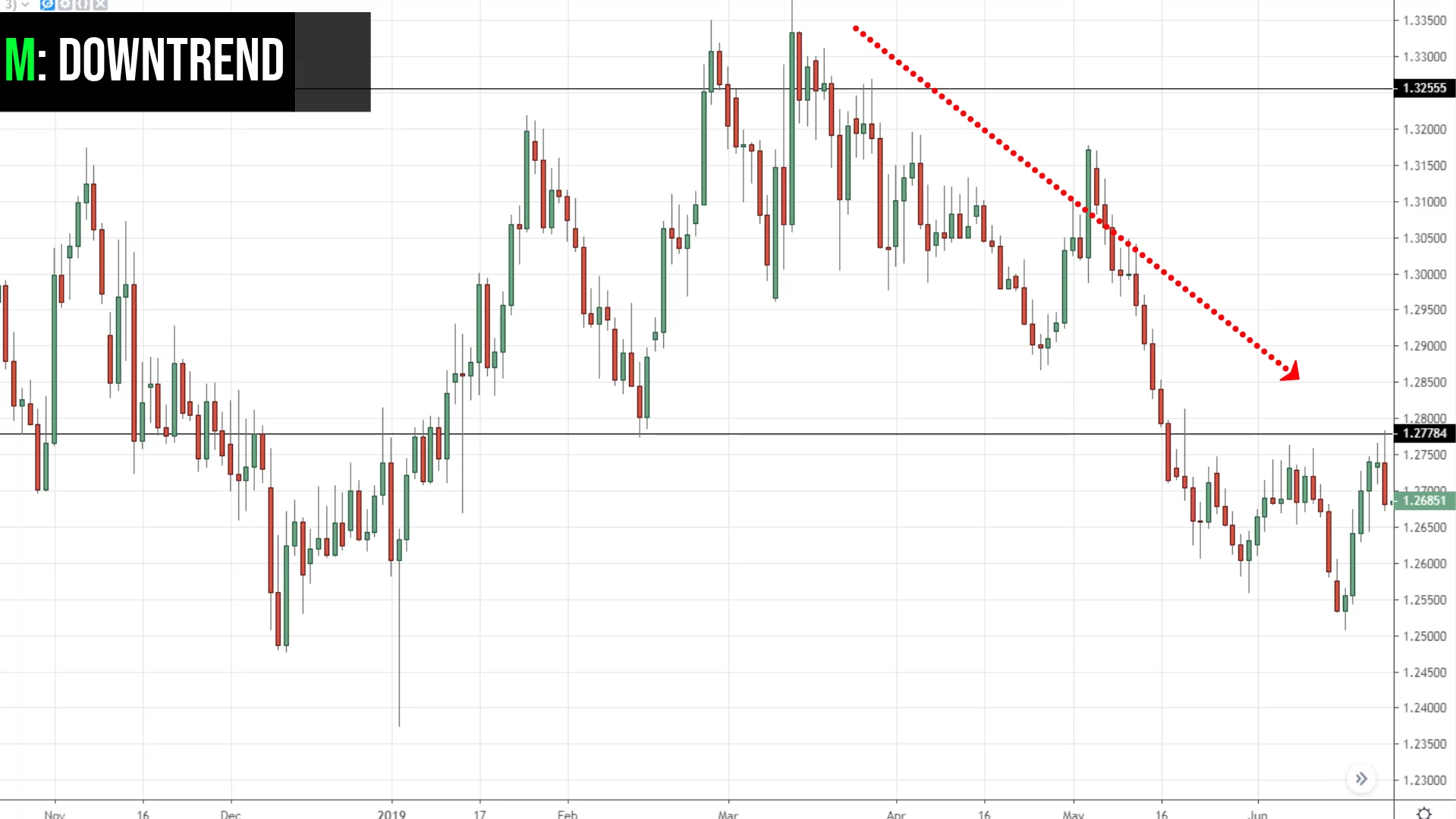 That’s the first thing, M, which stands for market structure is in a downtrend.

A for Area of value

Secondly, the area of value.

Where is the area of value?

This area of resistance is an area of value. 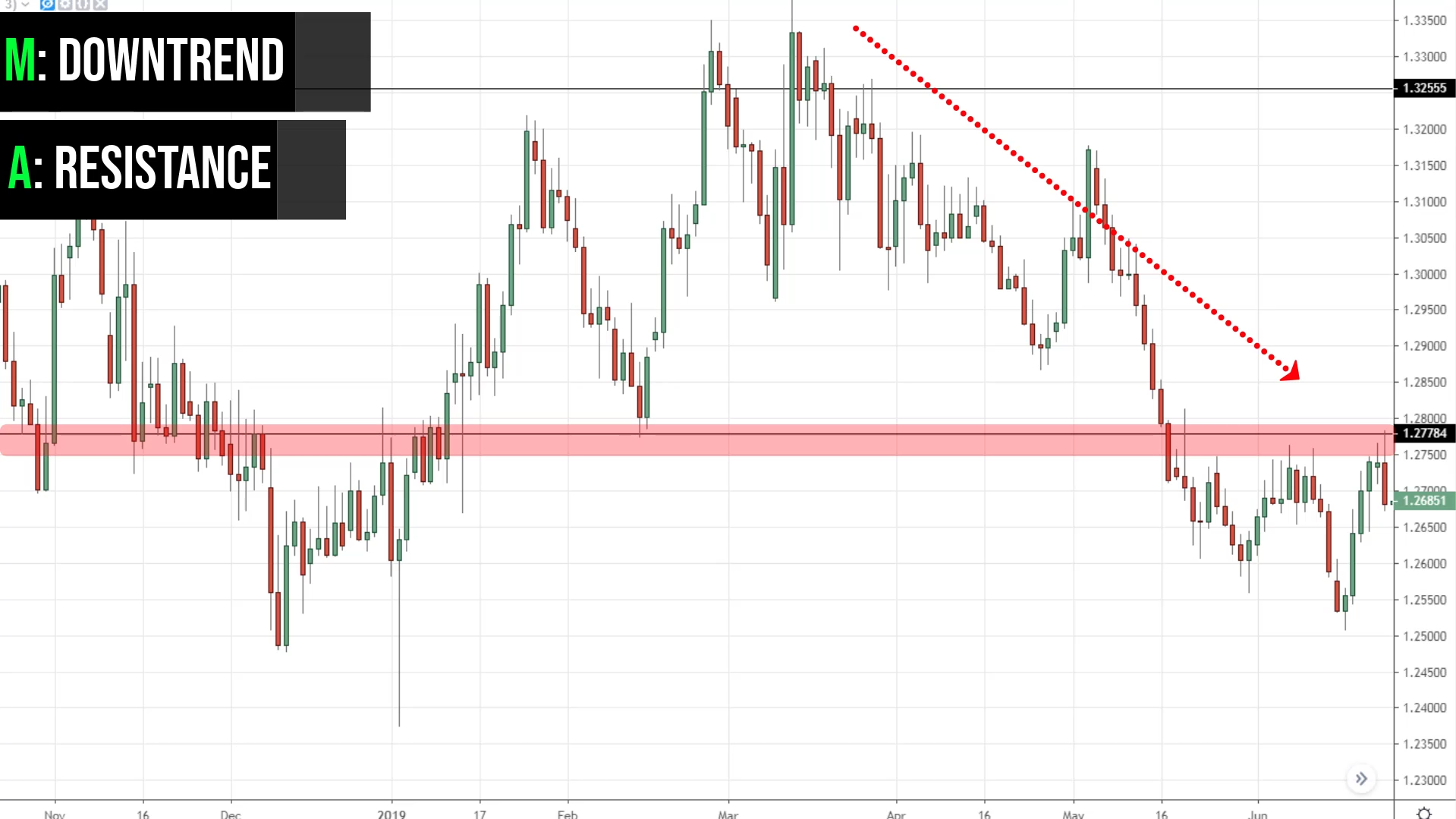 Let’s call our area of value, A. So A is resistance here.

Is there an entry trigger?

From what I’m seeing over here, this looks like a bearish engulfing pattern telling me that the sellers are temporarily in control. 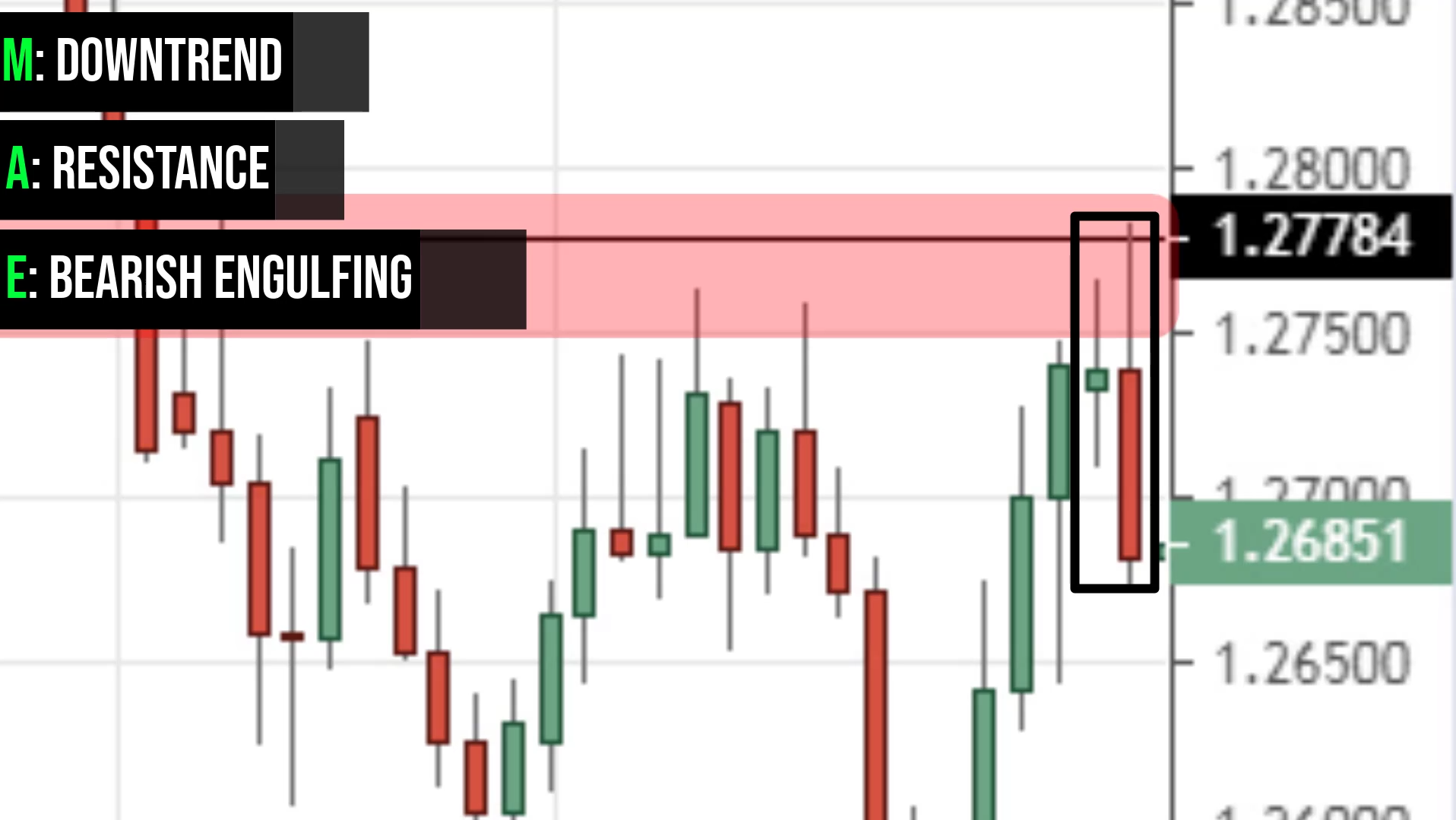 Yes, we have an entry trigger. Let’s call it E, which is bearish engulfing pattern here.

What about your exits?

Remember, I don’t like to set my stop loss just above the highs, because the price could just rally up higher and then collapse down lower.

If I just set it just above the highs, I would get stopped out. So I’ll just pull out the ATR indicator. I usually have a 20-period ATR.

From the chart, the ATR is about 80 pips. 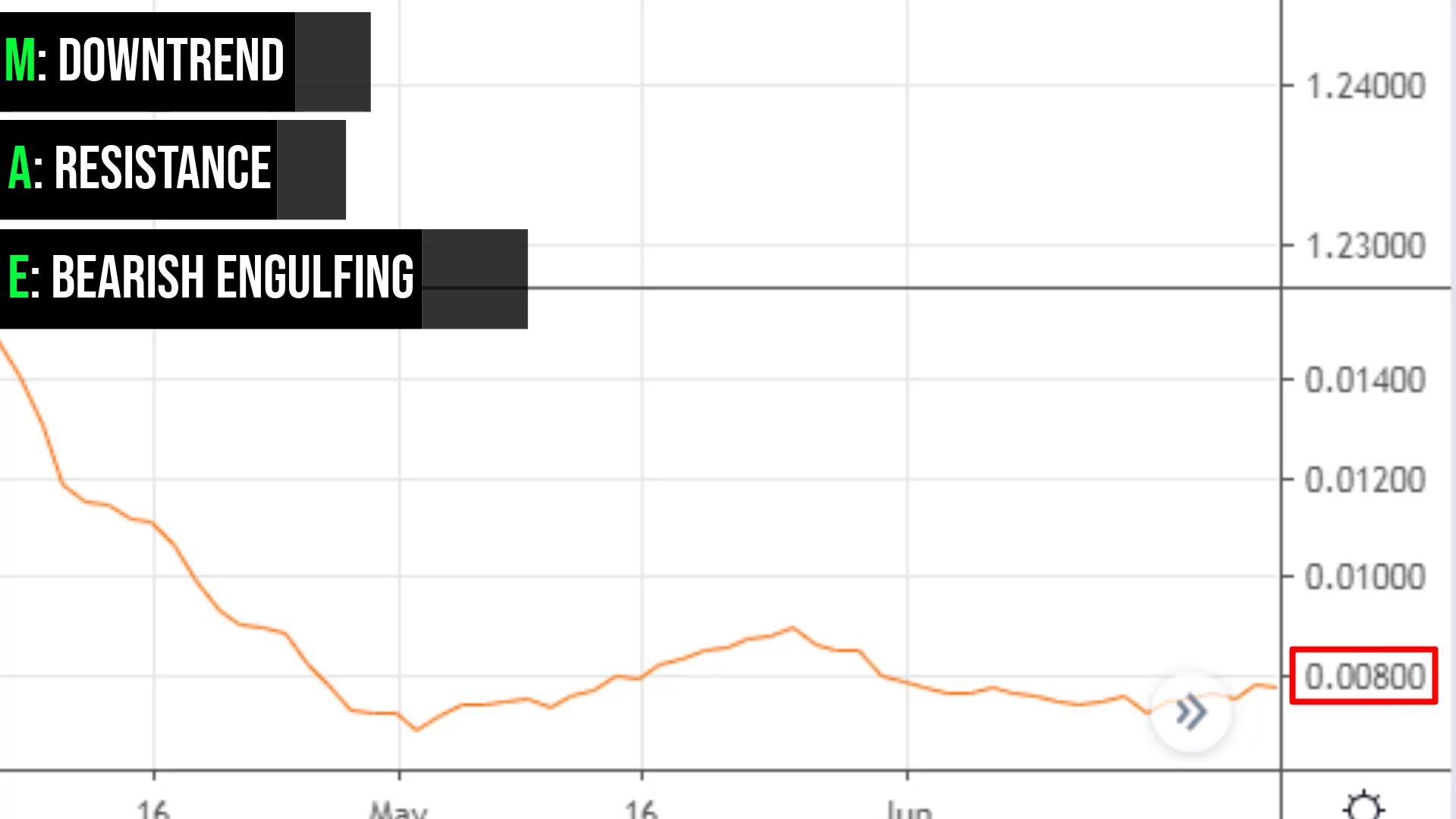 This tells you that historically, GBP/USD on the daily timeframe, over the last 20 days has moved an average of 80 pips.

What I’ll do is find the highs. 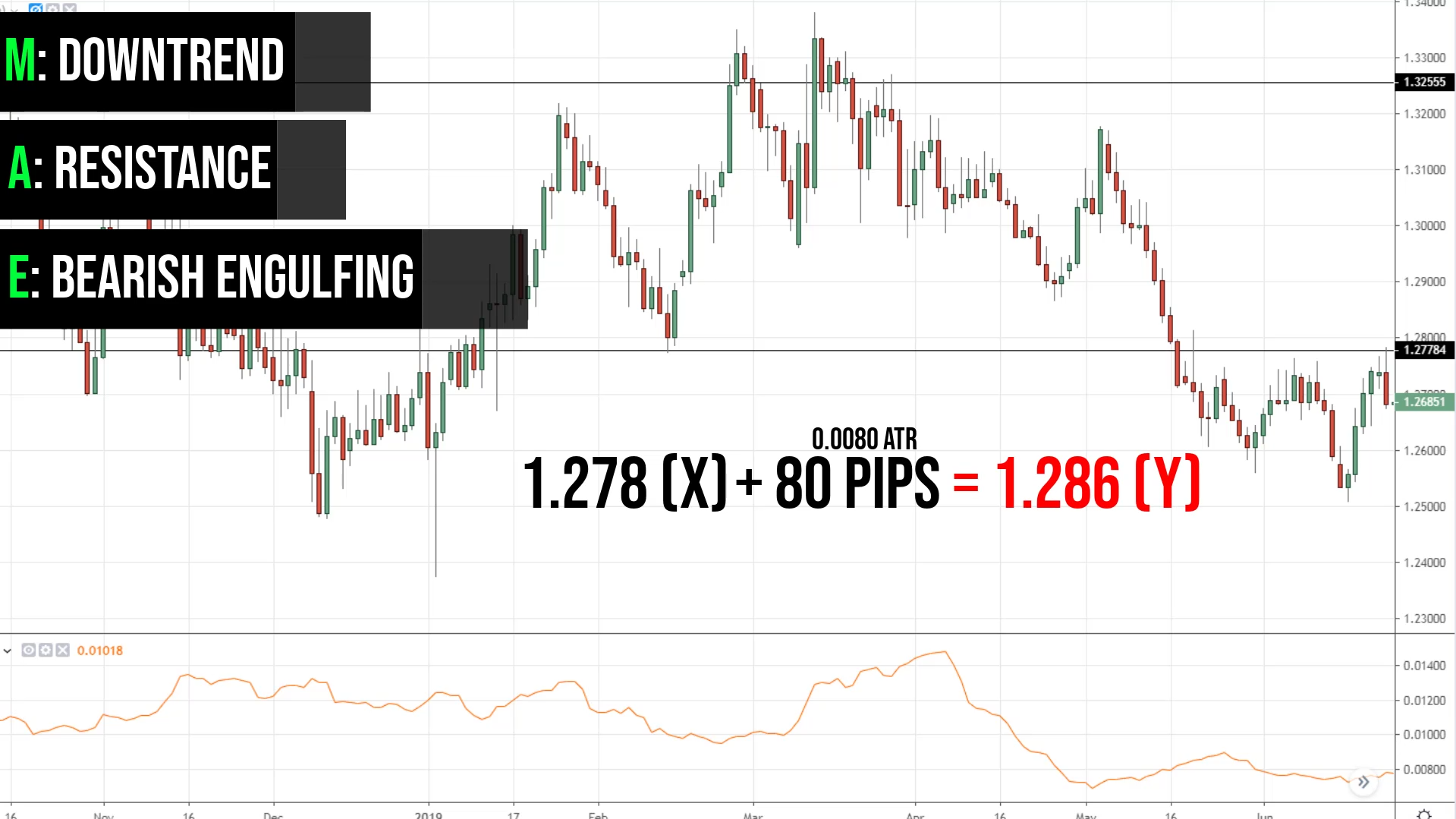 Let’s say the highs has a value X. Then I’ll add 80 pips to get Y. So my stop loss would be somewhere here at Y. 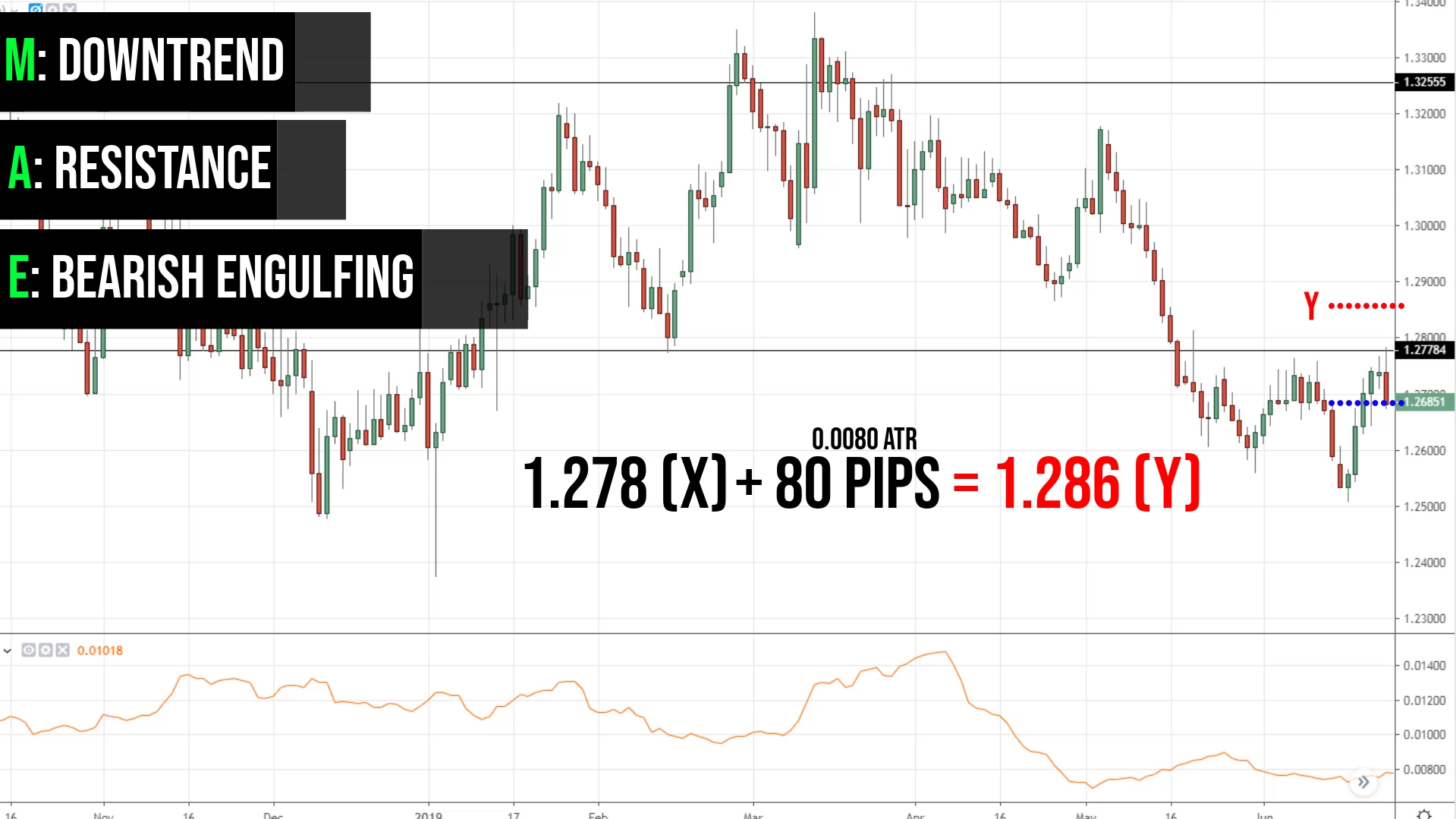 That is where I set my stop loss.

Where do I exit the trade?

If you recall, I mentioned that when it comes to exiting your winning trades, you want to exit before the opposing pressure comes in.

Where would opposing pressure come in?

I will say this swing low is a level that you want to be aware of where you know potential buying pressure could come in. 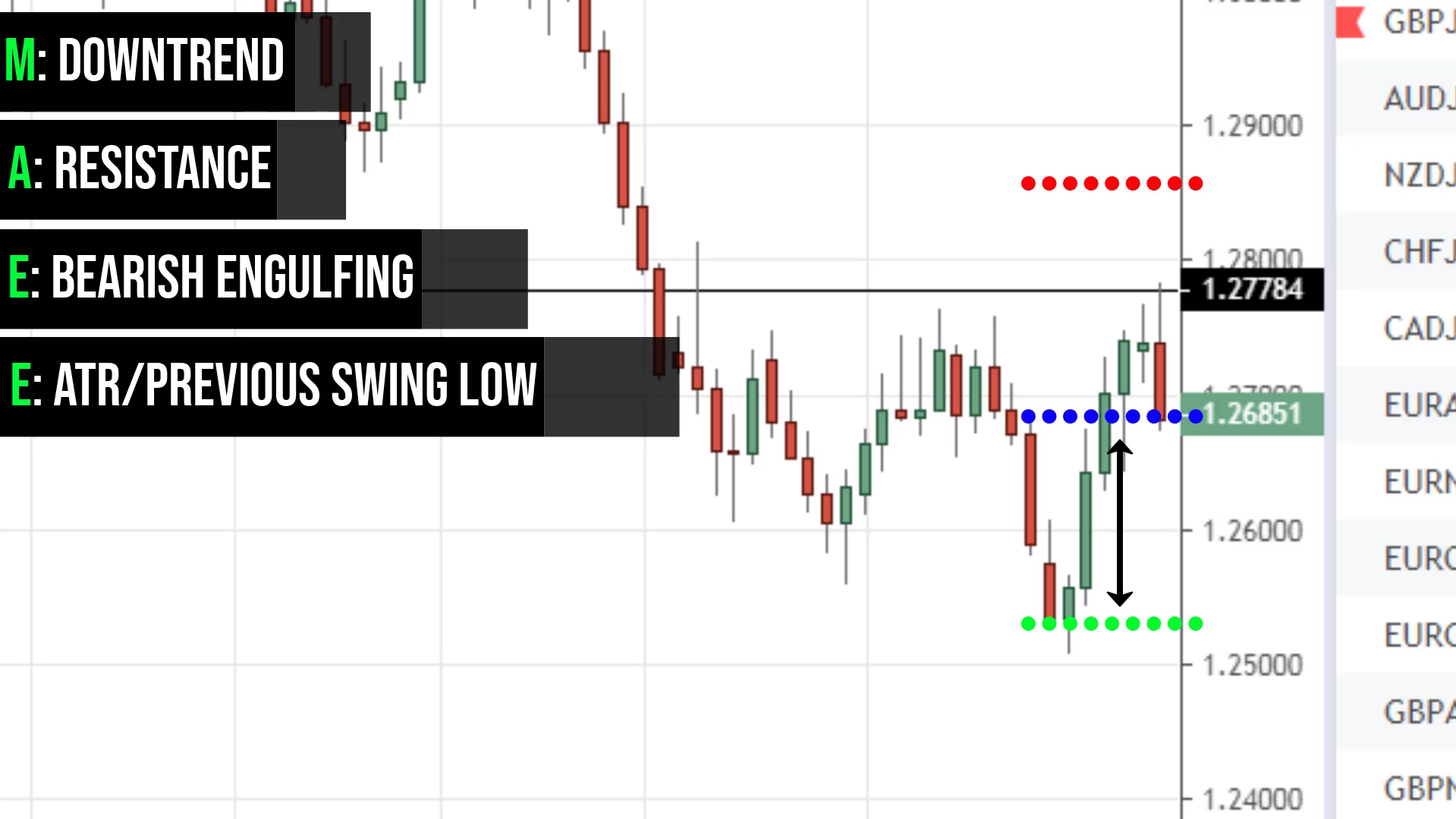 You want to be looking at this level to take your profit.

There you have it, a full example of how to use the MAEE trading formula.

Never trust anything, always verify everything. That’s the way to succeed in this business.

Because if you don’t to verify and validate a trading concept or strategy, then when the drawdown comes, you won’t have the conviction to continue trading it.

1. Power move into an area of value

Whenever you trade this type of reversal, it is in essence trading price rejection at an area of value.

You want to have a power move into a level. Price comes with a strong momentum into a level with large body candles. Then you look to buy in this area of value.

What you don’t want is to see the market come down into a level, in a very choppy stair-stepping manner.

Let me just illustrate this to you.

If you’re trying to buy and you see the market comes down in this manner, lower highs and lower lows.

This is the type of price action that I don’t want to trade. Why is that?

There’s a lot of places where opposing pressure comes in.

You can see that there’s a lot of areas or levels on the chart where opposing pressure could come in and reduces your profit potential.

This is why I don’t like to trade when the market comes into an area of value in a very choppy stair-stepping manner. I don’t want to trade those reversals. 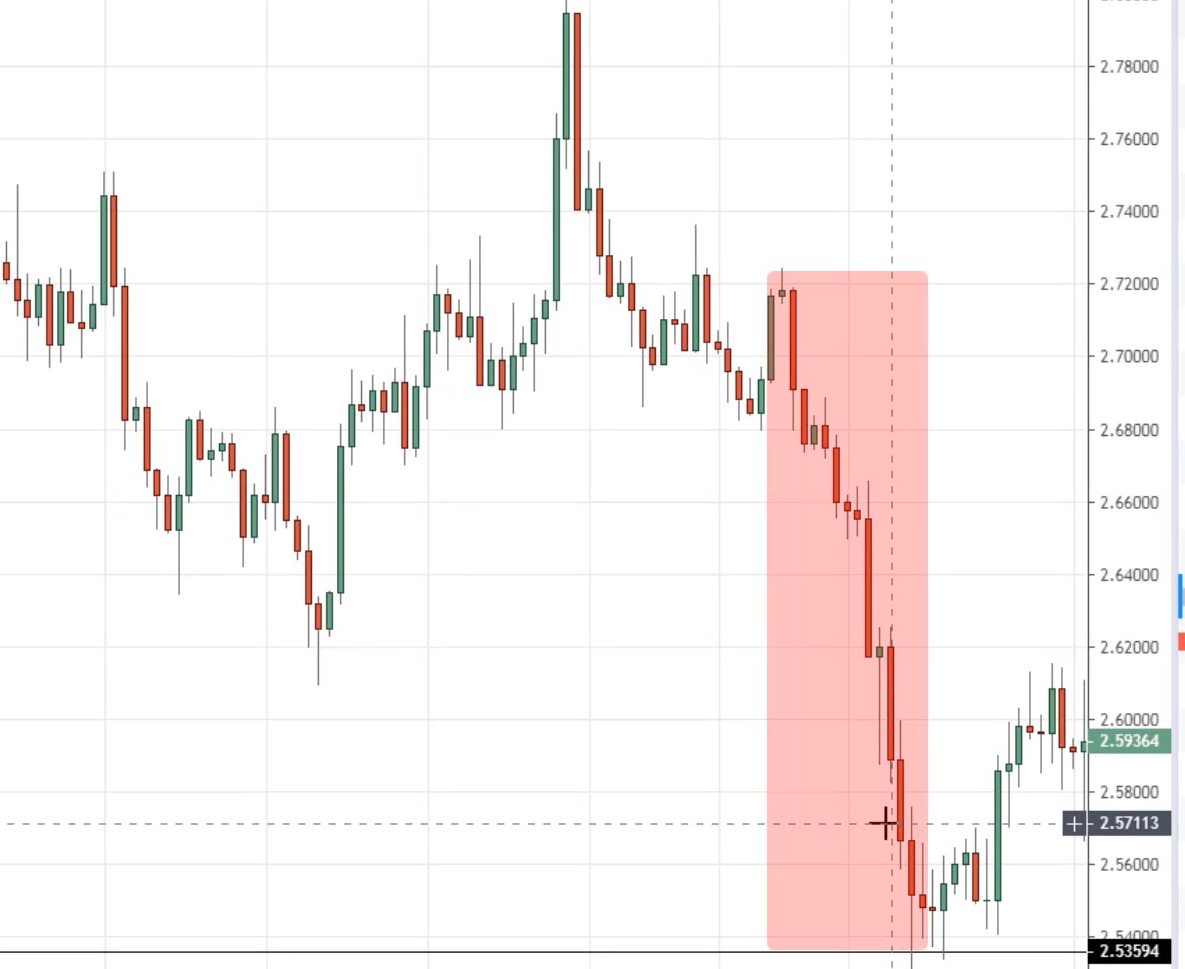 The candles are just one-colour candles and the range of the candles is large. That’s what I mean by a strong power move.

The price breaks out of a key market structure and then gets rejected strongly.

The price breaks out of resistance and it gets rejected strongly then closed back within the range.

I’ll like to see a false breakout because when price breaks out of resistance, above this high. Momentum traders will look to buy the breakout.

But when the price makes a sudden 180-degree reversal, this group of momentum traders, they are now trapped because they bought a breakout in the market.

Why? It’s because they bought a breakout after the price has made a power move.

That’s why I like to see a false breakout followed by strong price rejection.

3. Use a limit order

Sometimes when the price rejection is too strong, you might miss the move altogether. As a result, it’s too late to be entering the trade because the risk to reward will be bad.

What you can do is use a limit order to see if you can get filled at a better price.

Here’s what I mean by using the limit order technique.

An example from WTIOIL on the daily timeframe: 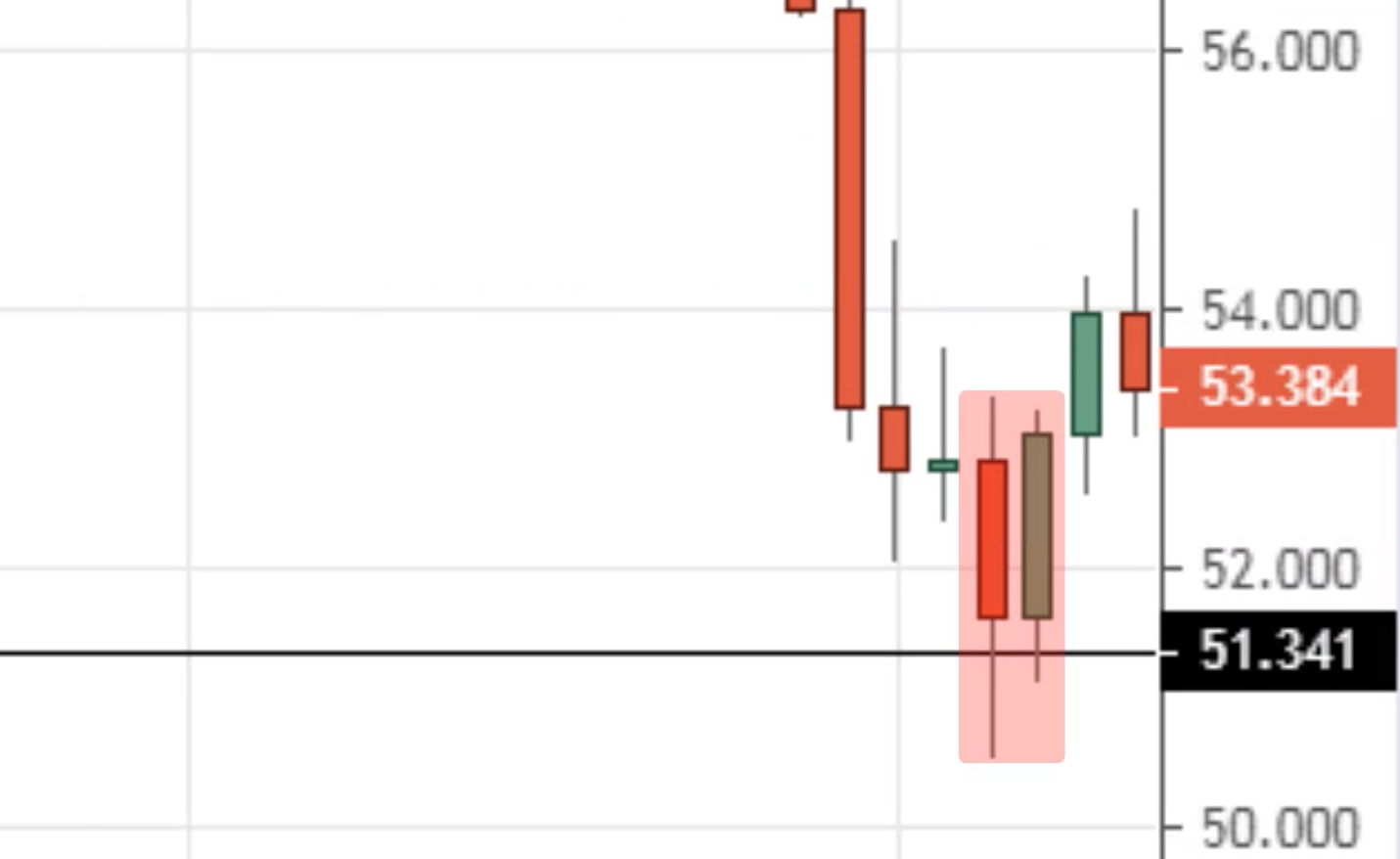 There is a price rejection at support and the market has rallied near the highs over here. 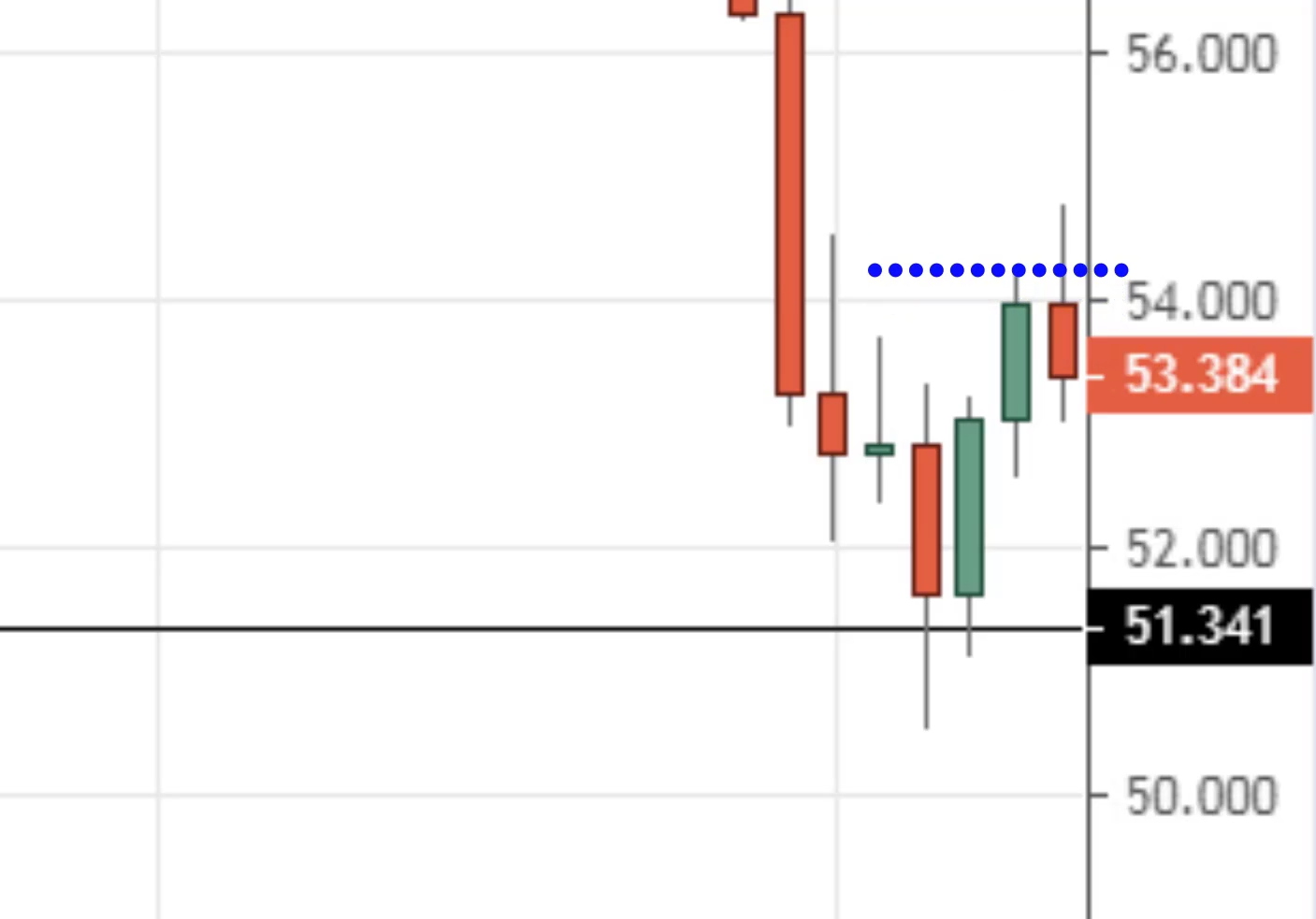 If you were to buy, you will be buying near the highs. Let’s say your stop-loss is 1 ATR below this low. 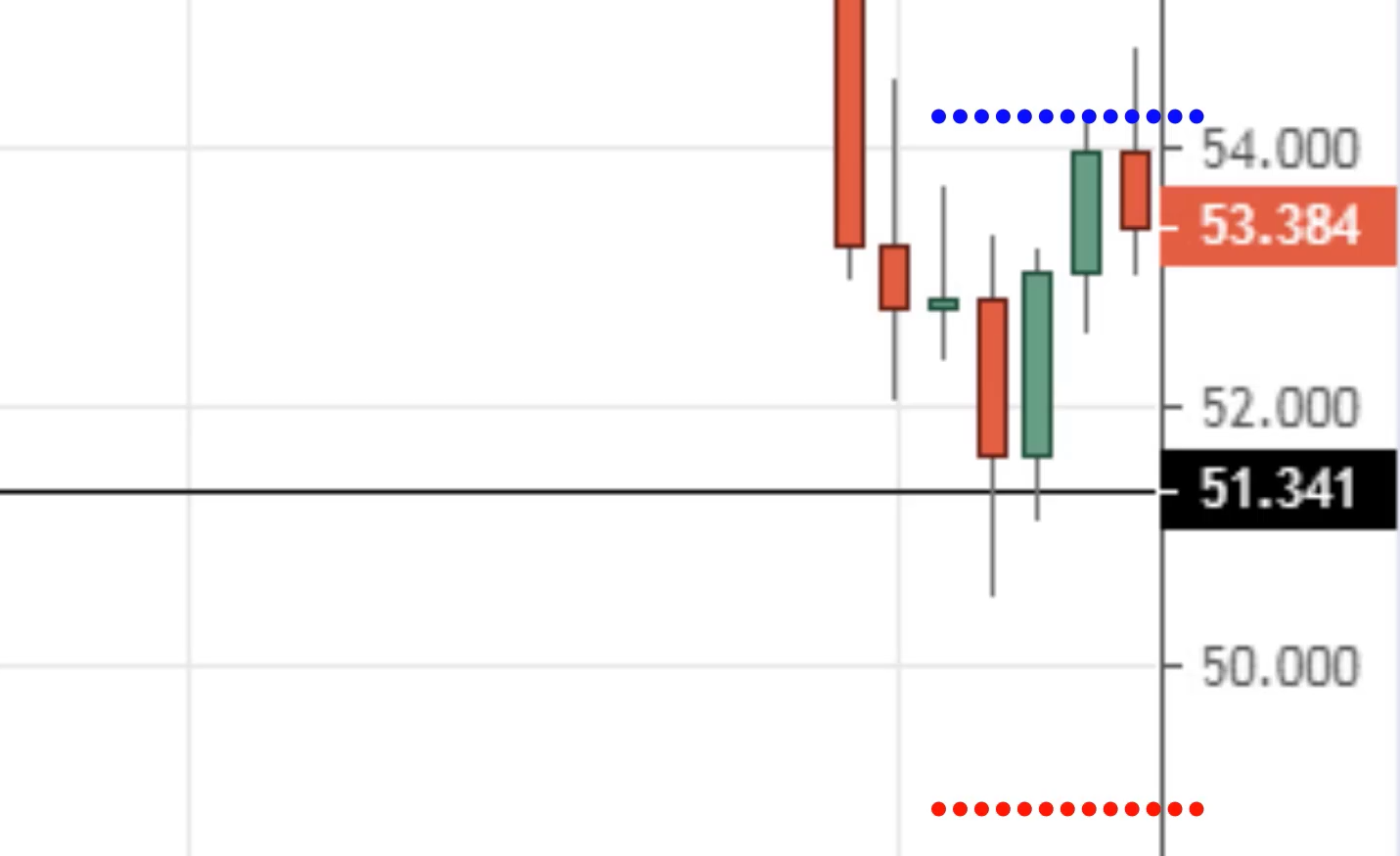 You can see that your stop loss is pretty far and It’s only going to be a short while before you encounter a selling pressure at this level. 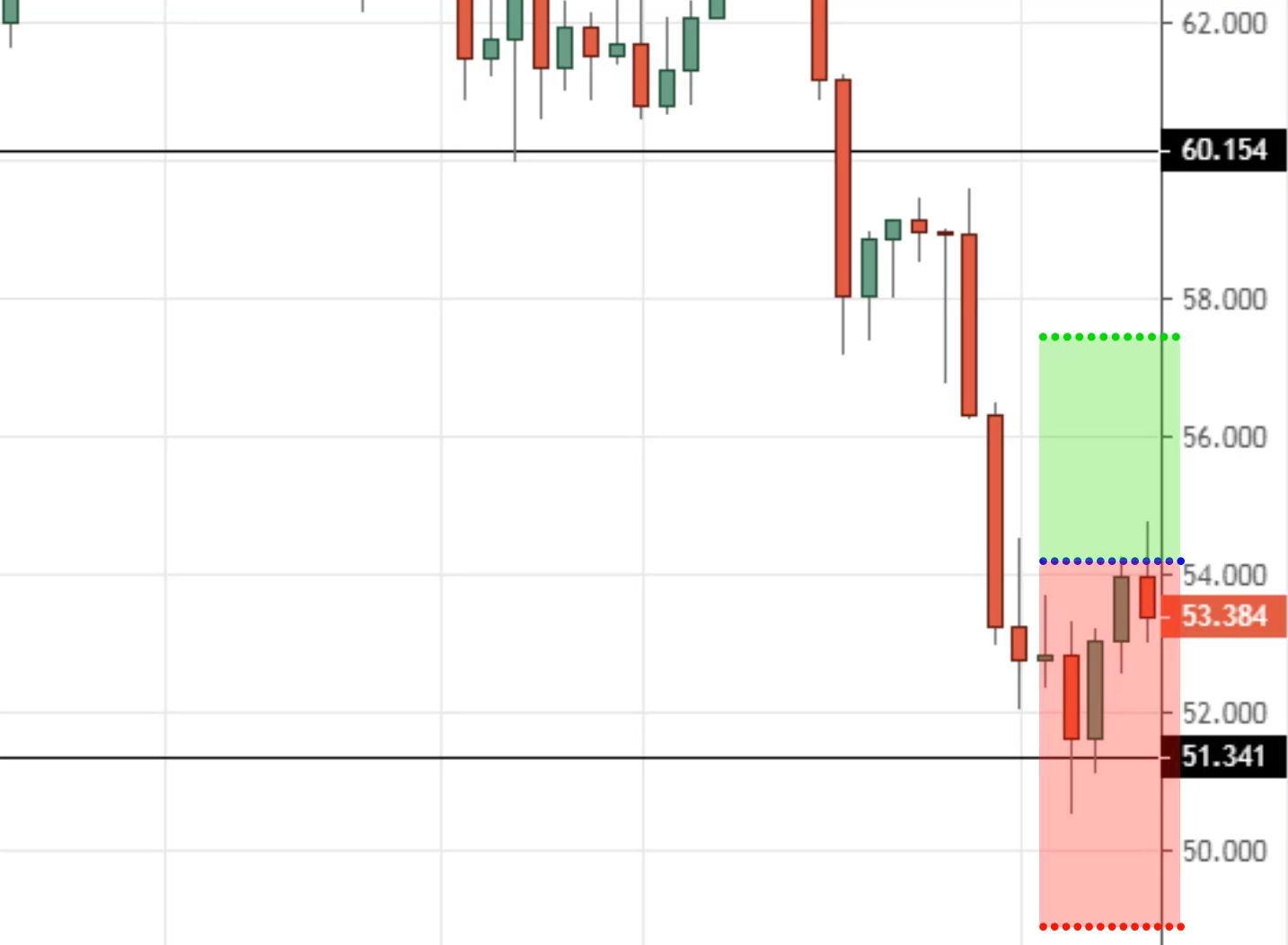 What can you do?

One technique is to use a limit order to see if you can get filled at a better price, and thereby improving your risk-reward on the trade.

Instead of you buying at this high: 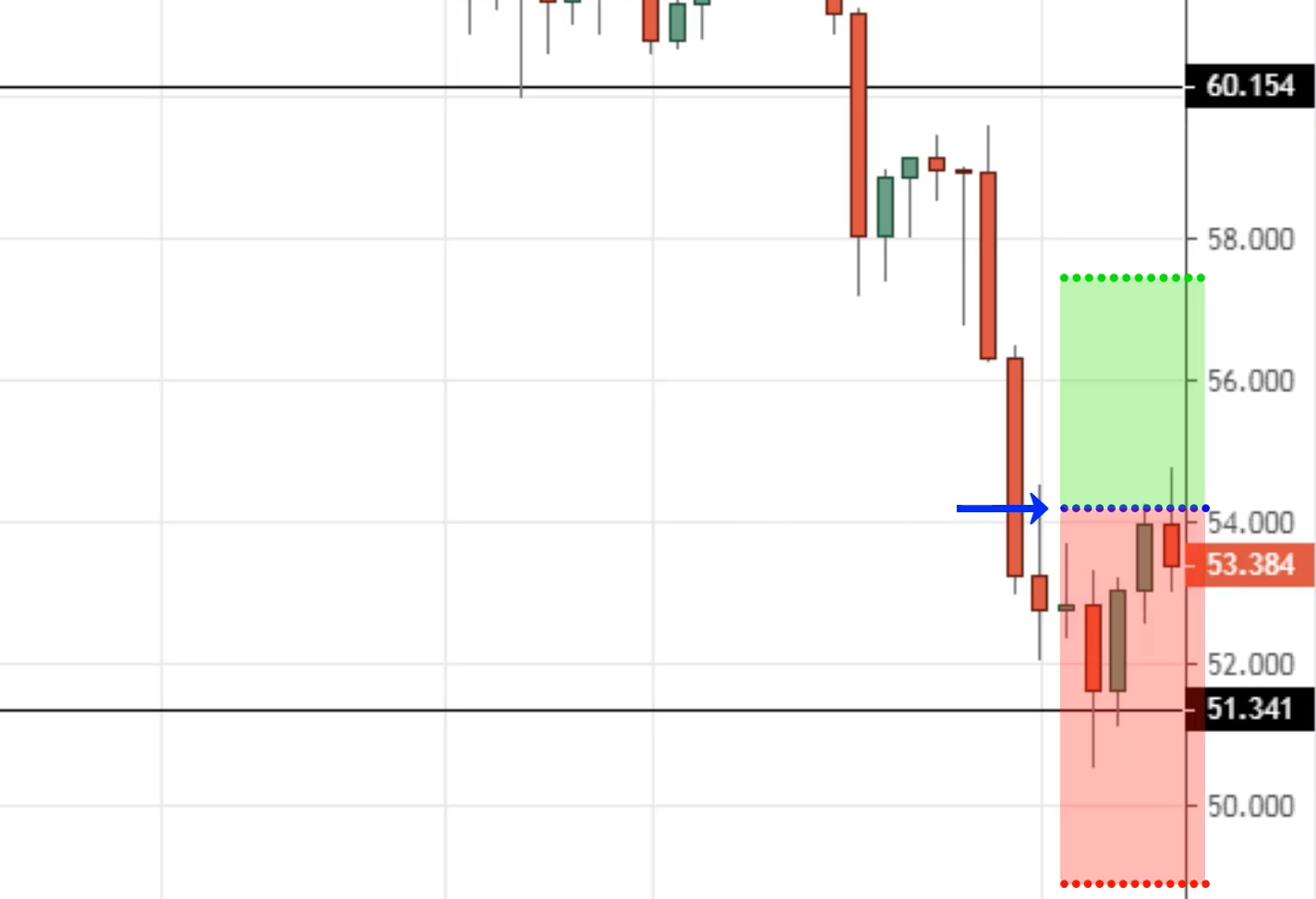 You tell yourself, “I’m just going to place a buy limit order, and see if I can get filled at a better price. If I get filled, I know my risk to reward on the trade would be improved.”

In this case, you can set your limit order just below the candles over here: 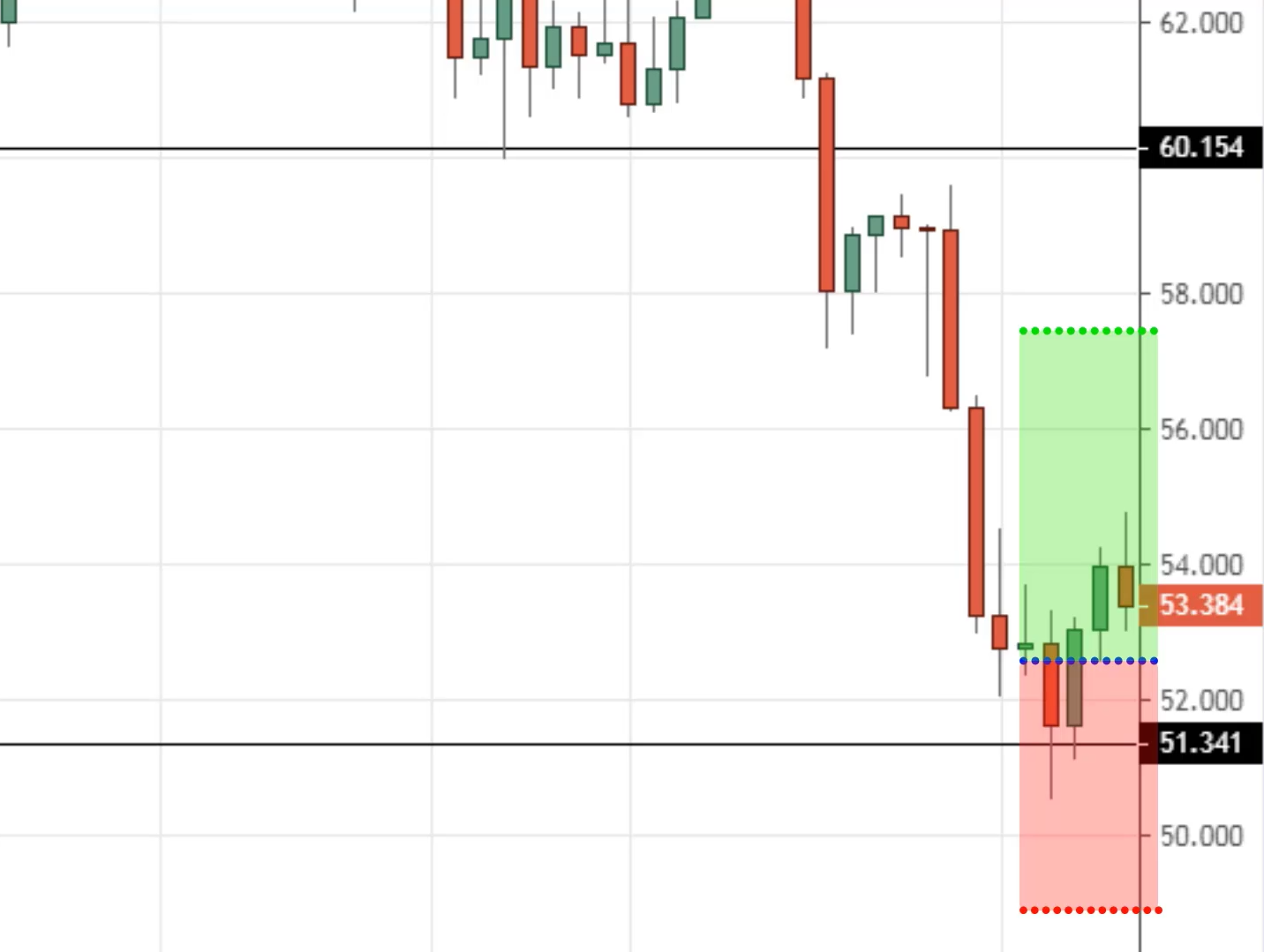 One thing to share with you is that whenever you set your limit order, you want to place it at a market structure where the price would have difficulty going through.

This is where you can use multiple timeframes to assist you.

Let’s look at WTIOIL on the 4-hour timeframe. 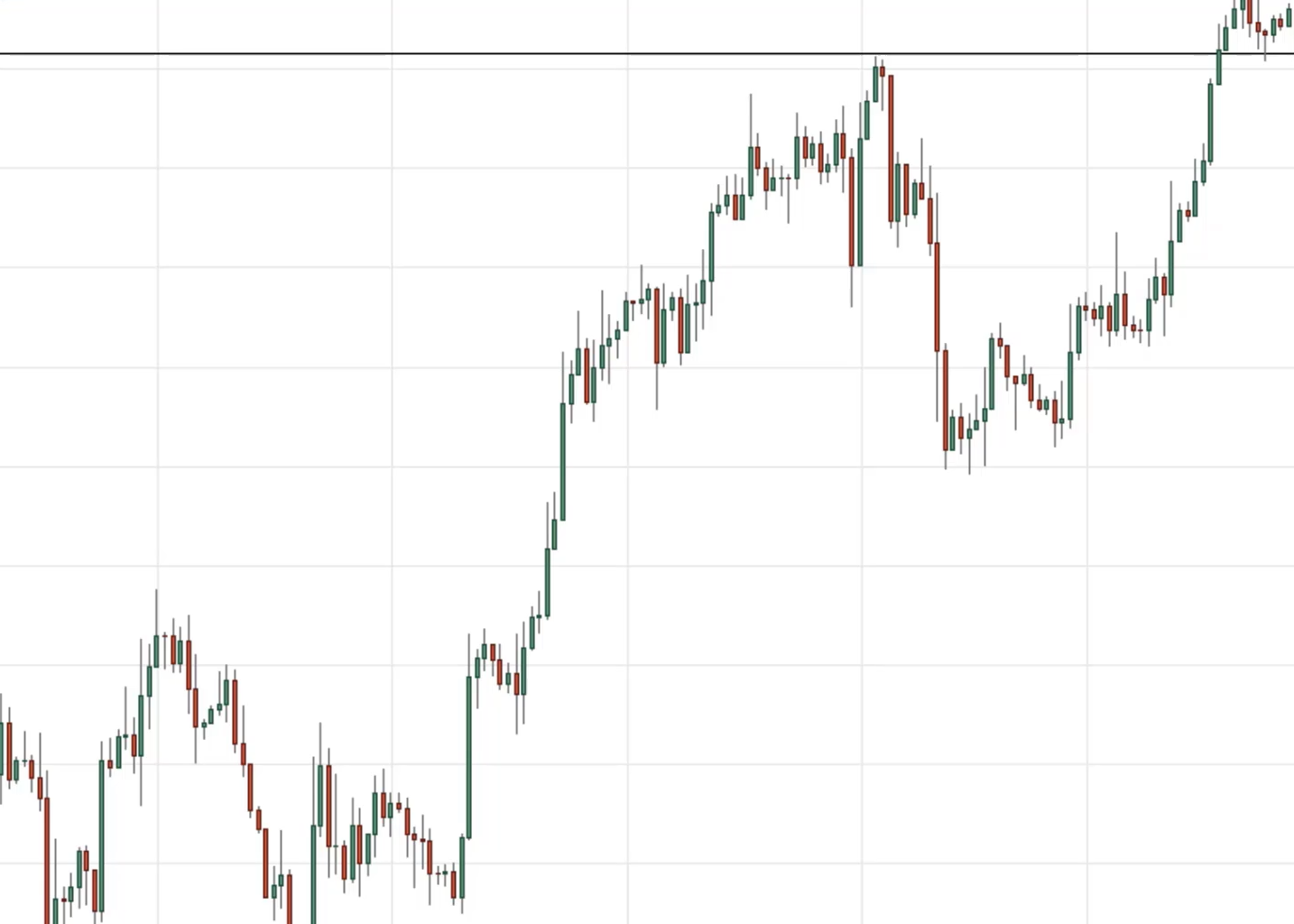 This was the portion where we saw earlier on the higher timeframe to buy near the high. 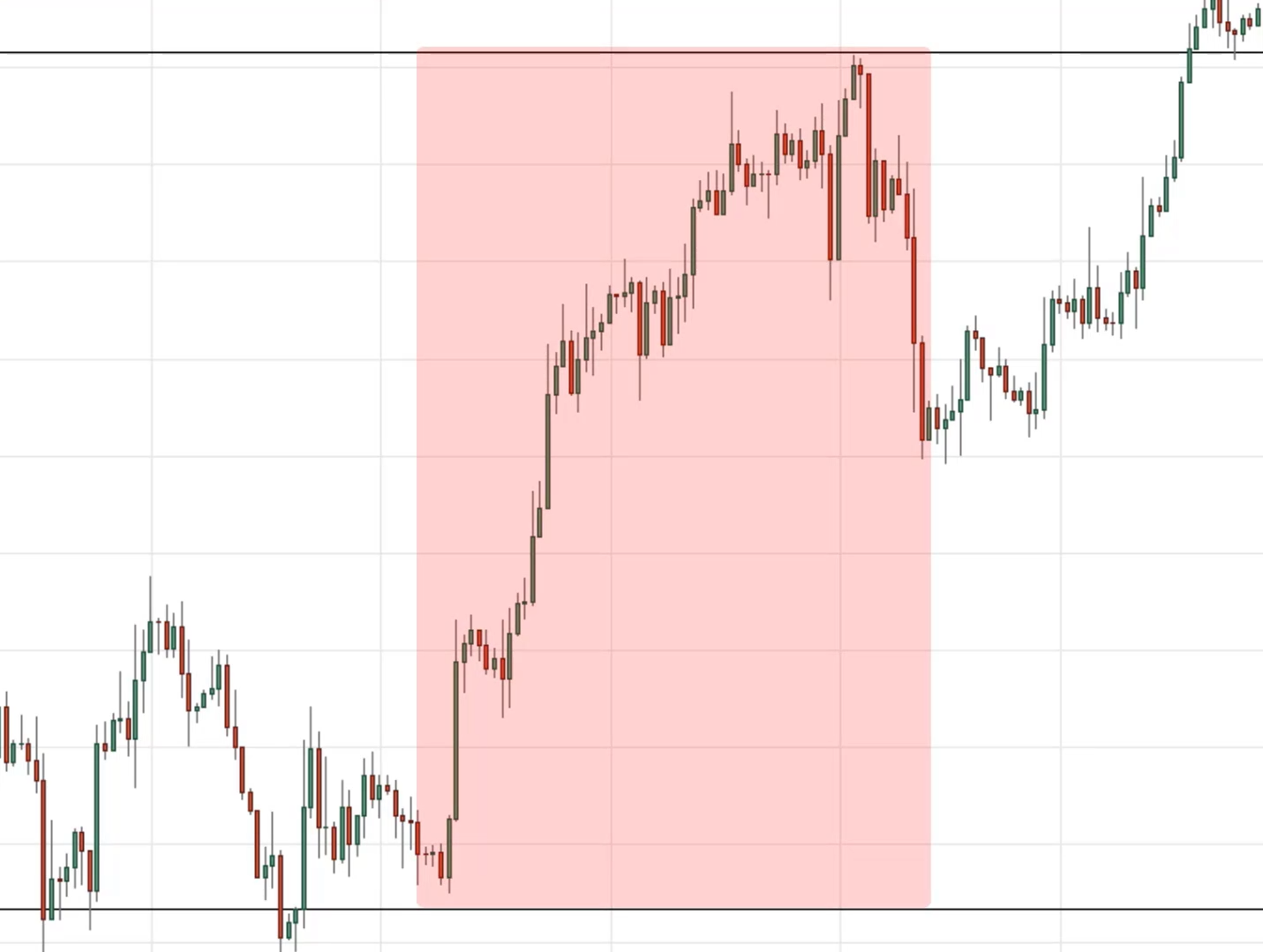 When you want to use a limit order to get it at a better price, let’s say there is this previous market structure over here, which is a previous resistance. 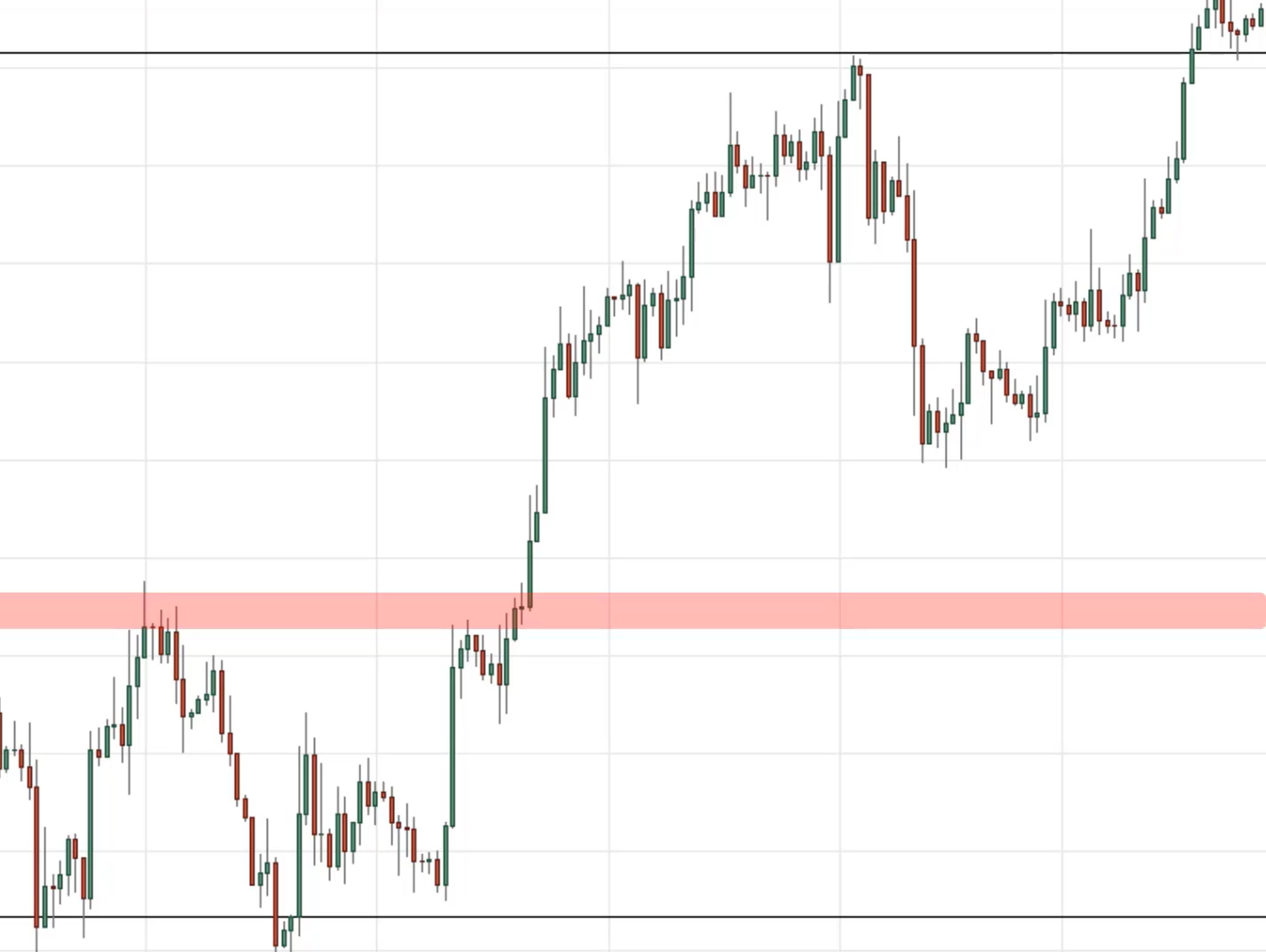 When you look at the chart there’s another market structure here over here. 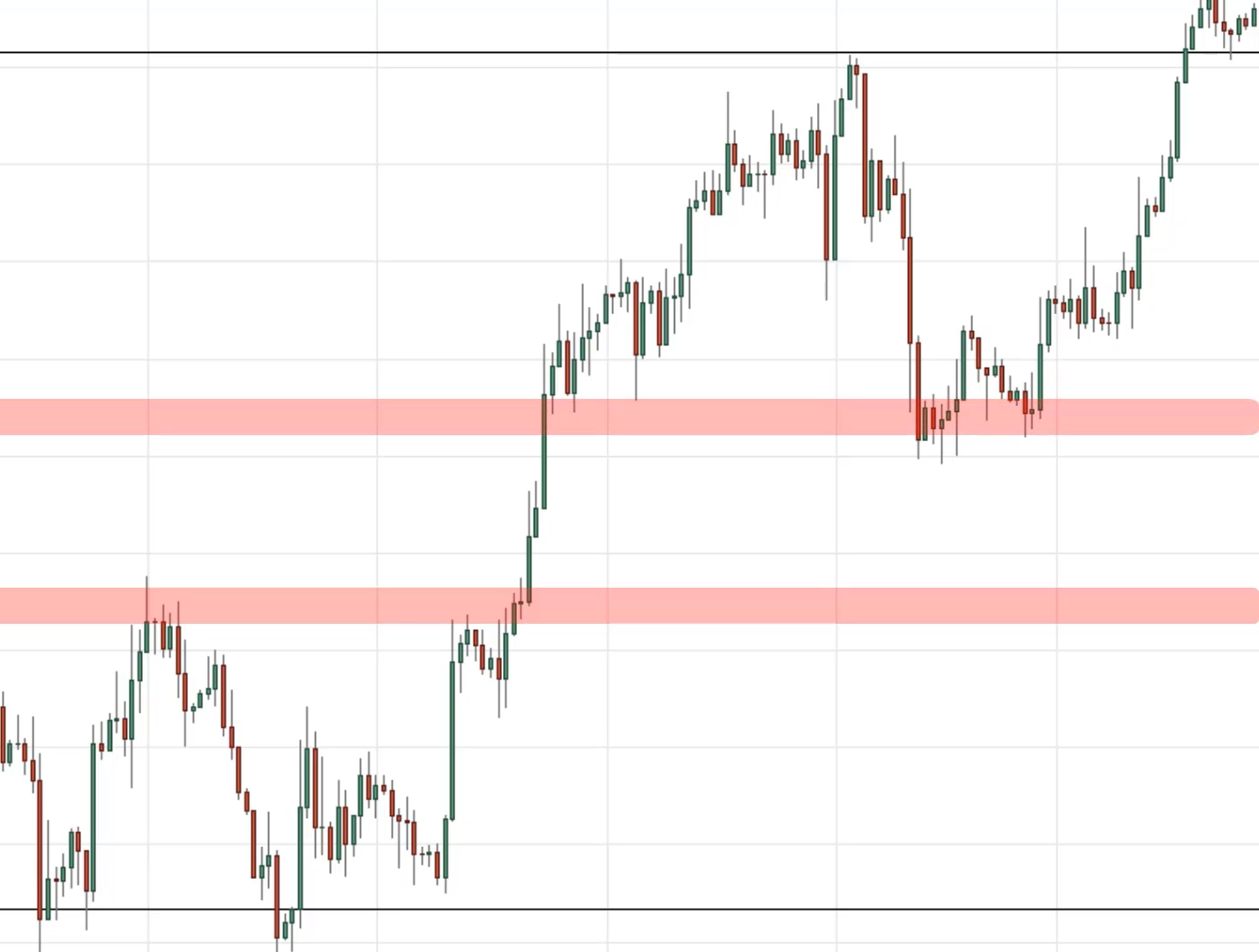 What you want to do is to place a buy limit order at this market structure. 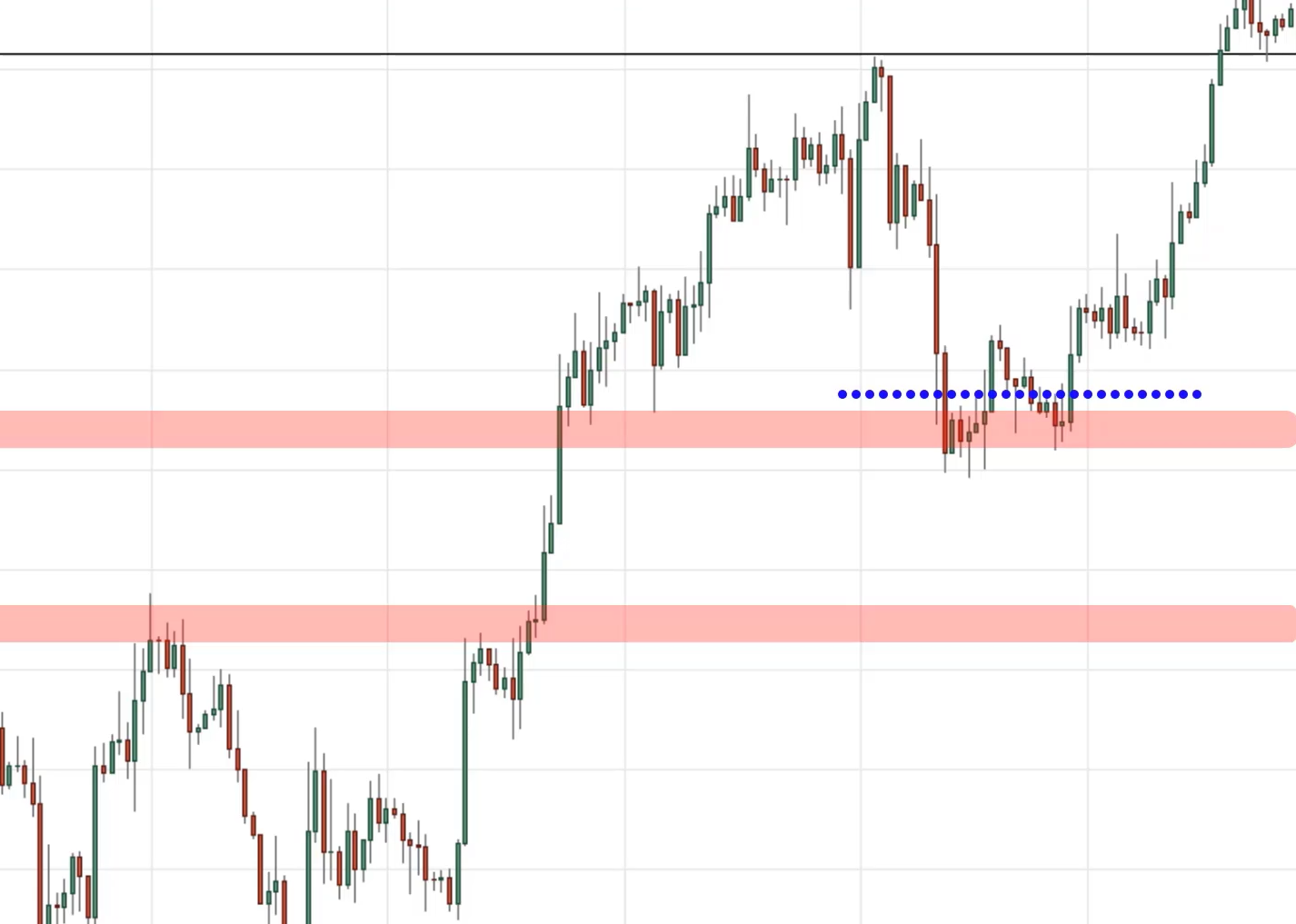 Don’t try to place a buy limit order over here because the price has to break down the market structures before it gets filled. 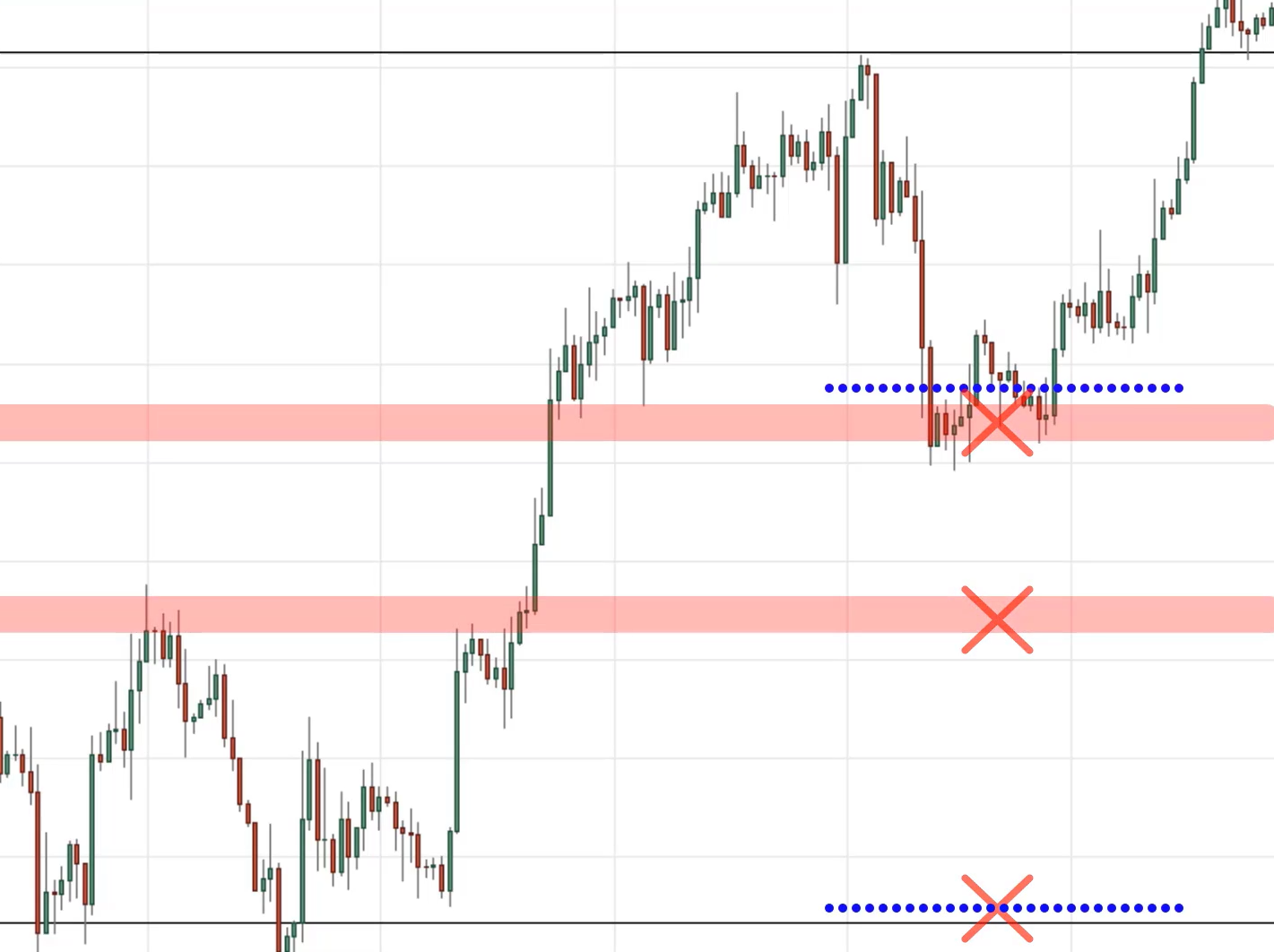 Here’s a quick recap of what you’ve learned.