I'm sure you've seen traders trade with a "naked" chart.

And you wonder to yourself:

And that's what you'll discover in today's training so you can also trade with a naked price chart to better time your entries and exits — without relying on any indicators.

What is price action trading and how does it work?

The first thing that I want to say is that when you're trading price action you need a framework.

For example, you have a 3000 square feet land and you want to build a house for your family.

How would you go about it?

I'm pretty sure that you wouldn't just randomly put random stuff on that piece of land, would you?

What you'll do is that you will probably hire someone to plan it for you.

To have a blueprint in your hands that says…

You want to have a blueprint in your hand to map out where the things should be at.

Only then, when you follow the blueprint would you have a house that actually makes sense.

Are you with me?

This is the same for price action trading.

You need to have a blueprint.

A frame of reference that you can compare against and then form an educated trading decision.

What is this framework or blueprint that I'm talking about?

This is something called the four stages of the market.

I first came across it by traders like Stan Weinstein, Richard Wyckoff, and earlier veteran traders.

This is a concept that I learned from them.

And if you have already heard of it or learned of it before...

I still encourage you to watch it because I'm going to tackle it from a different light that you might not have understood before.

As I've mentioned, there are four stages of the market:

And prior to this range, the market is actually in a downtrend: 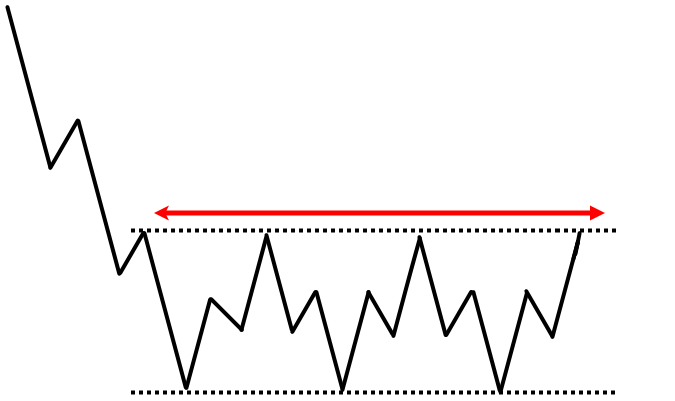 The market breaks out of the range then goes into an advancing stage: 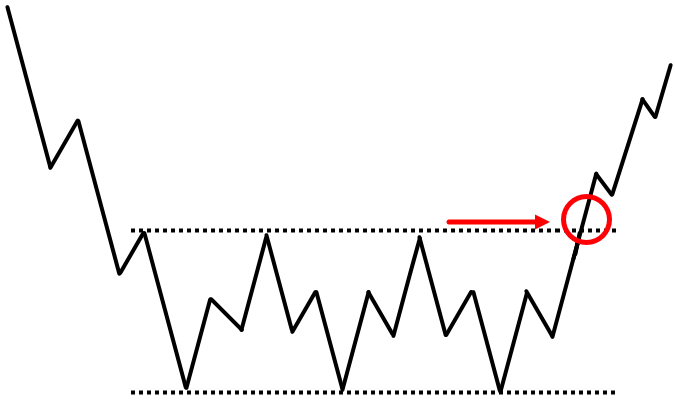 And the market doesn't go up forever.

Short sellers will come in.

And the market then slowly goes into a distribution stage like this:

Then after the market is in an equilibrium…

The market would eventually reverse lower into a declining stage:

This is where the sellers have to control and push the price down lower.

And the market doesn't go down forever.

Eventually, you find the level of equilibrium before the buyers take control and push the price back up higher once again.

So, it goes into an accumulation stage and then it makes an advancing stage once again.

You can see that this is the cycle that the market typically goes through.

Some of you might be thinking, "Hey Rayner, all this looks simple in hindsight. For example, this is a distribution stage but who is to say that the market can't break out higher?"

And I do agree.

The market can break out higher!

But what you have in front of you is a frame of reference.

Something that you can measure against!

So, let me give you a few examples of how I'm going to use this framework to plan my trading decisions with zero indicators.

How to find price action setups

If you look at this daily timeframe chart of palladium:

What is this stage of the market?

Chances are you'll say it's in an uptrend, an advancing stage.

If you can classify this as an advancing stage...

What is the one thing that you shouldn't be doing?

You shouldn't be shorting this market!

This means that you won't think of selling this market.

You won't think of shorting.

You will only find buying opportunities whenever you see a chart like this.

Where can you buy on this chart?

If you ask me, you can use the plain old vanilla support and resistance.

Now, I know that this market is in an advancing stage.

So if the market comes down lower retesting this previous resistance that could ask as support and gives me a bullish reversal pattern...

Say, a hammer or engulfing pattern...

I know that this is a possible level that I can look to buy since it's in an uptrend or is in an advancing stage!

Can you see what I'm trying to bring across?

Classify the stage the market is in and then plan your trading decisions by using support and resistance (or even trendlines if you want to).

For example, if I were to draw a trendline, I would draw it somewhere here:

If the market retests this trendline, I know it has the confluence of this area of support as well.

And if you want to use indicators, that is fine as well.

Using indicators are not bad.

Indicators are only bad if you use them solely to rely on them for entries and exits.

But now that you understand the context of the market, you can use the 50-period moving average:

You can see that the market is respecting the 50 MA pretty nicely.

So, these are all possible trading opportunities for you to get long in this advancing stage.

Let's move on to another example...

Recently we have a massive collapse on Bitcoin:

When you look at this chart, let me ask you...

Based on the four stages of the market you have learned earlier, what stage is Bitcoin in right now?

I hope you said a declining stage, which is another word for a downtrend.

Because it's quite obvious.

You can see a series of lower highs and lower lows:

In a downtrend, what is the one thing that you don't want to be doing?

You don't want to be buying in a downtrend unless you are an investor or Warren Buffett.

But if you are a trader, you don't want to be buying in a downtrend.

What do you want to do instead?

Well, you want to be shorting!

Now, you know what you should be doing.

You should be shorting Bitcoin right now.

The next question is, where do you want to short?

Again, this is where just simple technical analysis could come into play.

You can use trendline or support and resistance:

What I'll do now is that I will wait for the price to possibly retrace back towards this area of value:

Alternatively, what could also happen is that Bitcoin would form somewhat like a flag pattern:

At this point, let's say the market has formed a tight consolidation and since this is still in a declining stage...

I could still go short and have my stop loss just above the swing high over here:

You can see that once you have classified a stage of the market that it's in.

Then, you can formulate proper trading decisions that are according to the price action of the markets.

Now, let me go into something a little bit more complex from here.

This is the chart of soybean:

If you look at this, what stage of the market is this in?

This is where things get a little tricky because it might be in the accumulation stage.

But for me, I would classify this as an accumulation stage.

Usually, in an accumulation stage where the market goes into a range...

The 200 MA will start to flatten out and eventually move within this accumulation stage area:

This has not happened yet but it could possibly happen if you give it another few more weeks.

This is a signal too that this market is potentially in an accumulation stage!

If you know that this is possibly an accumulation stage because you also have a prior downtrend, what is the decision that you want to make?

You can be buying!

Because you know that if the price breaks above the accumulation stage, the market could possibly move into an uptrend:

Where do you buy in such a market condition?

You can look to buy on the retest of this area of support if there will be a false break setup:

I don't go into precise entries and exits because that is outside the scope of today's video.

Today's video is just really training you to read the price action of the market.

Another possibility is that if the market forms a buildup...

If the market breaks out, you can look to get on board the start of this new trend.

This is another technique that you can use to trade if the market breaks out of this accumulation stage.

And finally, another thing that you can do is let the market show its hand.

Let the market break out and then wait for the pullback to form:

All right, so let's move into something now a little bit more complex, shall we?

Now, if you look at the chart, it's actually somewhat similar to soybean.

This market previously has been in an uptrend, advancing stage.

But right now what's possibly happening is that this market is going into a range:

And if we pull out the 200 MA tool and recall what I've just mentioned to you a while ago...

Notice that this is happening on the S&P 500:

Now I won't confirm that this market is in a distribution stage!

Because really what could happen is that the market simply just breaks above the highs and continue the uptrend:

We are all dealing with probabilities whenever we are trading, not a certainty.

However, you also know that if this is a potential distribution stage, then you should look for shorting opportunities.

Now the question is where?

If you are bearish and you think that this market is topping already given the fundamentals and economy and etc.

Forms a buildup, and breaks down.

If all of the above happens, reference the high as your stop loss in anticipation of a decline.

The market comes up higher and gets rejected lower.

If that happens you can just look to short on the false break.

You can see that the false breaks somewhat gives you confirmation that the market isn't going to head higher any time soon.

This is why the price got rejected and it closed back within the range.

However, if this price pattern didn't occur...

Alternatively, if you want to short again, you can wait for the breakdown and then the pullback:

Similar as to what we've seen earlier on Bitcoin.

If you look at the chart of NZD/CHF along with its support and resistance:

One thing to share is that the four stages of the market appear on different timeframes.

The only difference is that the magnitude of the move is different.

If you look at a 4-hour timeframe:

This market is actually forming a head and shoulders pattern.

It is a potential distribution stage where we have this prior uptrend then the market goes into a range:

Now, how do we know that this could possibly be a distribution stage?

If you look at a daily timeframe:

You'll notice that this market is actually coming into an area of resistance on the daily timeframe!

This tells you that if the market were to consolidate and break down...

This has a pretty high probability of the market actually now heading down lower and then moving into a declining stage!

I know I've covered a lot in this price action training so let's do a super quick recap...