Why Most Traders Fail And How You Can Avoid It

In today’s training, I’ll share with you the reasons why most traders fail and how you can avoid it.

Because if you understand what makes all the new traders fail, then it would put you ahead of them and bring you closer to becoming a consistently profitable trader.

1. You rely on indicators to analyse the markets

There is nothing wrong with indicators and they are not bad.

But the way you approach indicators is likely wrong.

You shouldn’t use indicators to analyse the market to see if you should be buying or selling.

Because how the indicator is derived is this:

You take the price of the market, whether it’s the closing price, open, high, low, etc, then you apply a formula to it.

When you combine the two derivatives, you get the value on your indicator:

This is how most indicators work. The problem with using indicators to form a basis in a market is that it distorts your view of the market.

It doesn’t tell you what is real nor give you an objective view of what the market is doing.

Here’s an example on WTICOUSD… 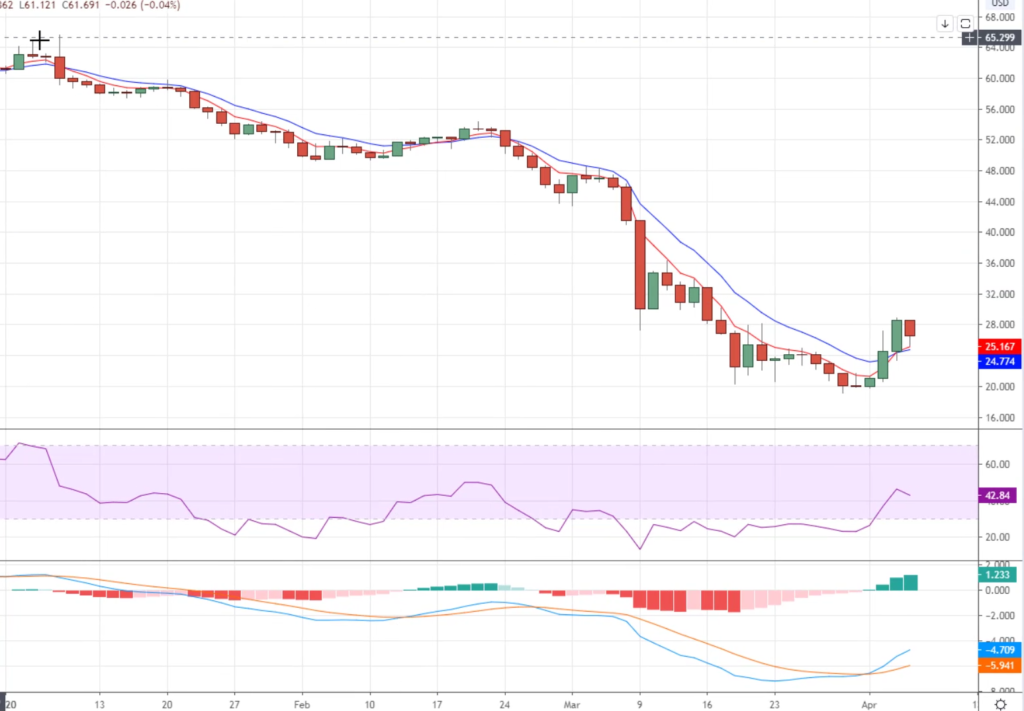 Looking at the daily timeframe, you can see that I have a few indicators:

From the looks of this chart, based on indicators itself, you might think that:

“Hey Rayner, the market is bullish. Look, the RSI hitting higher. The MACD has positive bullish momentum, there’s a crossover of the MA, these are signs of strength!” 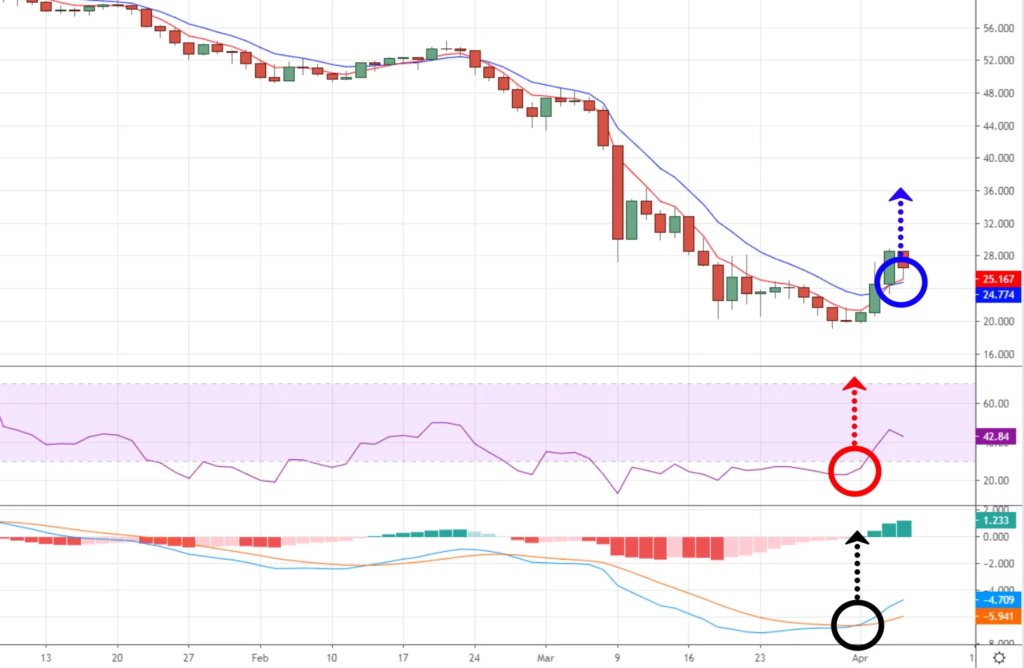 You form those thoughts based on what the indicators are telling you.

But remember, I said that indicators can distort your view of the market. Because indicators are based on the price plus the formula.

In other words, if you were to change the formula of indicators…

Instead of 5 and 10-period moving average, we go with 20 and 50-period respectively. While for the RSI, we change it from 14 to 30-period. And then we change the MACD settings too. 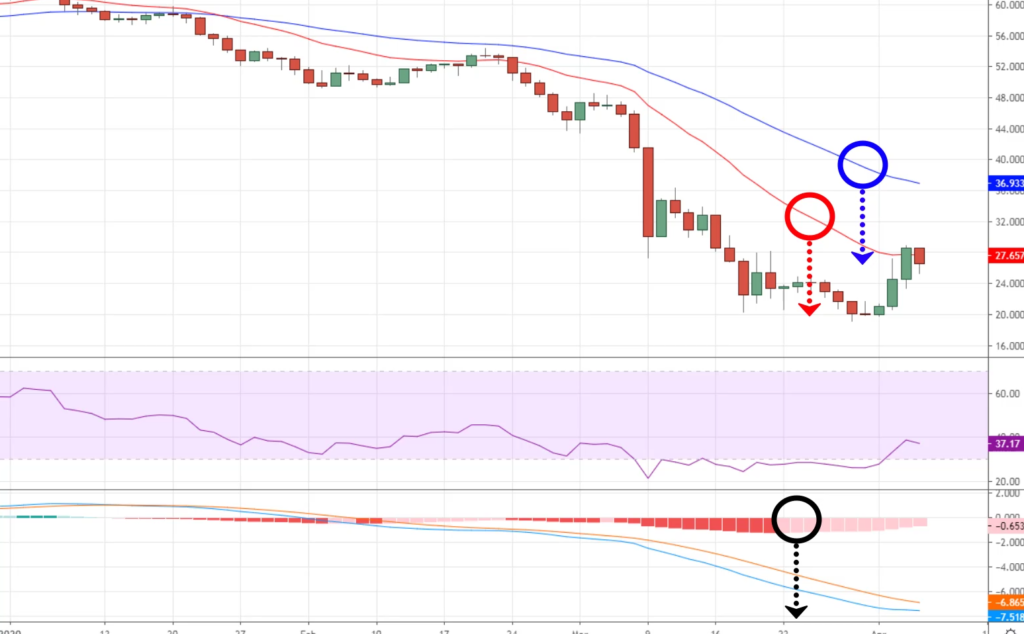 Can you now see the initial picture has changed due to tweaking of the indicators giving you a new picture?

Both of the moving averages are pointing lower. The RSI, there is not much difference.

But if you look at your MACD from a bullish momentum previously, now its bearish momentum, the two lines are still pointing lower.

Can you see where I’m coming from?

Indicators are derived using the price plus a formula. That’s how indicators come up with that value.

If you adjust that formula to your bias, you will never get an objective view of the markets.

That’s why traders keep losing money because they keep playing around with the best indicator settings.

They adjust the settings up and down to fit their own bias of the markets.

You shouldn’t use indicators to form your analysis of the market.

2. You rely on fundamental news

If you’ve studied what the textbooks told:

If good news comes up, the price should go up. But why did the price go down instead?

If bad news comes up, the price should go down. But why did the price go up?

That’s the thing about markets, they are not trading the news. Or rather, the market already digested this piece of news ahead of time.

What matters is the expectations of the news release. That’s why the market goes up on bad news and goes down on good news.

Here’s an example on AMD:

How do you explain this?

The news is bad, but the share price goes up. Why is that? How could you have predicted that?

There’s no way to predict how the market will react to a piece of news, whether it’s going to react positively or negatively to the news.

Consequently, whether the news is good or bad, it has no impact on the share price. Because you’ll have no idea how the share price will react to that piece of news.

The point I’m trying to make is that fundamental news will not tell you where to buy or sell because the market can go up on bad news but go down on good news.

When Trump became President, a lot of people were negative about Trump because they all felt he doesn’t know what he’s doing.

They just didn’t like him, and if he becomes President things could get worse. What happened was that you have this massive spike down lower.

When he became President, it was bearish for while within the day. After which the price broke out of the highs and continued higher.

Why can a market still break out all-time highs?

Why is it bad news but the market still goes up?

The point I’m trying to make is that fundamental news would not you where you should be buying and selling because the market can go up on bad news and go down on good news.

You can’t use fundamental news to manage your risk

Let me give you an example.

Let’s say you buy Google at $100. Because you are trading based on fundamentals, you will only know whether to sell that piece of stock after the news release.

Here’s the thing, the news is usually updated once every quarter, every three months, and by the time the news is released.

The share price of Google could be at $50 from bad news that comes up. Imagine by the time the market opens, it’s already at $50 and you’re down by 50% on this stock.

But if you go with technical analysis, you can set your stop loss. You can predetermine it ahead of time.

But if you’re using fundamental news to manage your risk, you have no idea how bad things could get. It could move against 50% against your entry price before you cut your loss. Or it could be 70%-80%, but you’ll never know.

And if you never knew how much the loss would be, it’s near impossible to manage your risk based on fundamental news.

Many traders use fundamental news to base their decisions that’s why they don’t find the right results with it.

3. You rely on signal services

What is this? This is simply following people’s market call to know where they should be buying or selling. This is a disaster.

If you subscribed to a signal service or an expert advisor, just because they are making money over the last 1-2 years doesn’t mean that they’ll continue making money.

Maybe you can only make money in a bull market when the market is in an uptrend.

But what happens when the market conditions change into a range or a downtrend?

Would it adapt to it? Is it fast enough to adapt to these different market conditions?

Have you ever seen a chart that’s forever in an uptrend? No. Because the market condition is always changing.

Market conditions change and when it changes most of these signals stop working.

You won’t have the conviction to trade them

Let’s assume that you have a very amazing signal service provider. Its track record is amazing and you believe that they can adapt with the times.

Here’s the thing, no matter how good a trader or a signal service is, they will experience a drawdown. Drawdown means you encounter a series of losing trades. You will face losing streaks.

The problem with this is:

If you don’t understand how these signal service providers get their signals, the methodology of their trading setups and ideas, or you don’t embrace it wholeheartedly, then what happens is that when the drawdown comes, you won’t have the conviction to continue trading it.

Because you don’t understand how the trading system works.

You’re not in control

Let’s say you happen to find a very good signal provider and expert advisor that has been dishing up signals consistently.

But here’s the thing, what if they decided to stop doing business with you? What happens to your trade?

You’re no longer in control. That’s game over for your business. And it’s the same for trading. You don’t want to leave your trading decisions to someone else to be in control.

You want to be in control, whatever happens, you take responsibility for your profits and losses and no one else can be blamed for it.

When you are in control, you have the power to change things for the better.

As a result, signal services, expert advisors are no-go.

Here’s a quick recap on what I’ve covered…