#1: What is Forex trading and How Does it Work

What is the FOREX market?

Forex trading is simply the trading of one currency for another.

This is something that I would say 99% of us have dabbled in Forex. May not be electronically where you're going long or short but physically when.

This is one form of Forex trading.

You're selling your own domestic currency for foreign currency so you can spend their currency in the foreign country that you're visiting.

Who trades FOREX and why?

Forex is largely traded by:

Central banks are usually meant to intervene in the FX markets.

This is an example of the Central Bank intervening in the FX markets.

Banks like Deutsche Bank, Goldman Sachs, HSBC where they trade Forex, but as a form of market making to provide liquidity to corporations.

As well as to hedge their book in case they have any currency risk, then these banks will also trade the Forex market.

Banks and corporations have a close working relationship.

But the thing is that my car spare parts are not found in Japan.

I may have to go to countries like India to source for these spare parts.

If I'm the car maker, in order to buy the raw materials to manufacture my car, I need to get them in a foreign country.

So, what I'll do is that I will sell my own country currency, Japanese yen for the Indian rupee.

So, I got an Indian rupee and I can go to India and buy the relevant materials that I need.

This is another form of Forex trading for corporations where they typically sell their own domestic currency in exchange for a foreign currency to buy relevant raw materials that they need.

This is how corporations dabble in the FX markets, and also to hedge whatever positions that they have that could be exposed to currency risk.

Retail traders are like me and you who speculate in the Forex market to earn a profit.

I believe this is the reason why you're watching this video right now, to learn how to trade the Forex market.

Let me share with you how it all works this ecosystem… 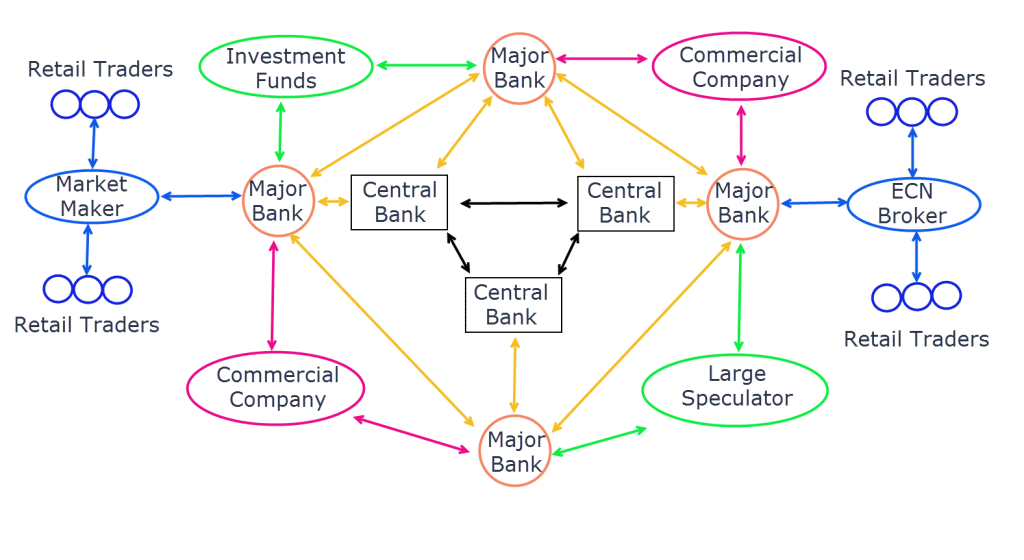 You can see that the central banks are the largest, followed by major banks like Deutsche, Goldman, JP Morgan, and whatsoever.

All these major banks have relations with investment funds and commercial companies like Toyota and Cadbury, and also hedge funds who want to trade in the FX market.

On top of it, they also have connections to market makers and ECN brokers.

From then on, this is where your own broker has a connection to you, the retail trader, through their own trading platform.

This is how the ecosystem work.

Banks would communicate with your own retail brokers, commercial companies or investment funds.

It does not mean that they will dabble in all three categories for the banks.

Some of them may just choose to focus on investment funds, some just focus on commercials company or maybe some can have dealings with all three different categories.

But you as the retail trader, you only have access with the connection with the market maker who then might pass on your order to the bank connection directly.

May or may not depend on how your broker established their trading system.

This is the hierarchy of the FOREX market: 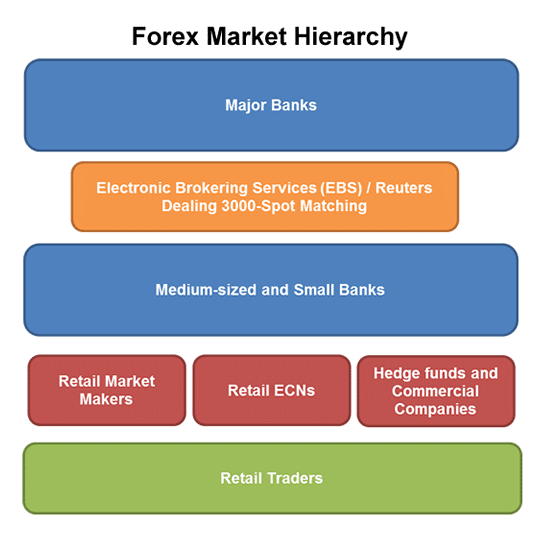 You can see the major banks are at the top.

They put in the largest orders and they typically communicate with one another using the EBS system.

Further down the food chain is where you have your retail market makers, the brokers, the ECNs.

They put hedge funds and commercial companies at the same level.

But to me, I will say this group of traders (hedge funds) are typically one level above retail trading.

Last but not least is retail traders who trade the FX market.

This is why retail traders like you and me don't move the market. Markets are usually moved by the big players which I shared with you at the top of the food chain.

What are the advantages of FOREX trading?

The advantages of trading in FOREX are:

Whenever you put in an order into the Forex market...

You don't have to worry about getting a poor price because there is a huge amount of liquidity.

And you pretty much need to enter really large lot sizes to even move the market.

You don't have to worry about whether you get filled or not.

Chances are, when you hit the market you'll get a price which is close to what you see on your screen.

This means that anyone can join or trade the Forex market unless your country is banned from Forex trading.

If not, what's there to stop you from opening an online account and just submit necessary paperwork and you can be trading Forex!

Trading in the Forex market allows you to trade very small lot sizes.

You can trade up to the micro lot or even nano lot.

These are really small lot sizes that allow you to better manage your risk, unlike stocks.

For example, you buy one share of a blue-chip stock. In Singapore to buy at least one lot of shares is at least 1000 shares.

If your account size is too small, you can't even buy one lot of shares in Singapore.

Compared to Forex, you have better risk management because they let you trade really small sizes.

You can wake up in the Asian session, put in an order, manage your trade or in the London session, in the New York session.

You can pretty much trade anytime you want.

Unlike the stock markets where it's usually open for eight hours a day during the respective time zones that your trading the particular stock market.

One thing about Forex trading is that there are no transaction costs. You only usually pay the spread.

If you think about this, in Singapore, let’s say I want to buy $500 worth of shares.

The transaction costs typically in Singapore is 25 bucks. So, 25 divided by 500, when I buy the shares, this is equivalent to 5%.

I'm already down 5% the moment I put on the trade. And this is still not taking into consideration the spread on the trade that I've paid.

What I'm trying to say is that when you trade stocks with a small account and you're buying a small number of shares, fixed transaction costs will eat into a huge percentage of your returns.